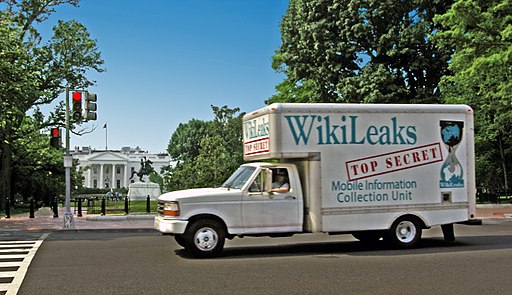 “It is the sense of Congress,” according to the annual Intelligence Authorization Act now working its way through the US Senate,”that WikiLeaks and the senior leadership of WikiLeaks resemble a non-state hostile intelligence service often abetted by state actors and should be treated as such a service by the United States.”

US Senator Ron Wyden (D-OR) was the lone dissenting vote on the bill, which was approved by the Senate Intelligence Committee in late August. Wyden is on board with Congress’s general anti-Russia/anti-WikiLeaks hatefest, but worries that the bill’s “novel” phraseology might be “applied to journalists inquiring about secrets.” That’s a valid concern as far as it goes, but it doesn’t go nearly far enough.

WikiLeaks’s disclosures include material on US war crimes in Iraq and Afghanistan, torture at the Guantanamo Bay detention facility, and US spy operations against putative allies (including a scheme cooked up by the CIA and then Secretary of Secretary of State Hillary Clinton to spy on United Nations officials).

“Vault 7,” the current round of WikiLeaks disclosures, reveals the tools the Central Intelligence Agency uses to compromise our computers, our telephones, even our televisions, Not to mention the tools it uses to spy on, get this, other US intelligence agencies.

Not that the US government is the sole target of this “non-state hostile intelligence service.” WikiLeaks embarrasses governments around the world by showing their subjects the secrets those governments (yes, including Russia’s) don’t want them to see.

Ever since passage of the National Security Act of 1947, the US government’s “defense” and “intelligence” apparatuses have accustomed themselves to growing  and operating absent any obligation or accountability to the citizens and taxpayers who pay —  in treasure, and sometimes in blood — for their games.

Bottom line: The CIA, the NSA and the other “alphabet soup” agencies of the US government spy on you, lie to you, and commit crimes in your name with presumed impunity. WikiLeaks merely shows you what they’re doing, and has yet to be caught in a lie.

One Response to “WikiLeaks: Hostile is as Hostile Does”