I am about to tackle the most onerous task of all: Preparing my family’s income tax. But before I take this unwanted leave from Key West’s Blue Paper for a few weeks, I want to address, “Who is Key West’s ‘Housing First’?”

The Needle In a Haystack. It took longer to get the answer that question than to earlier find out “Who is White St Partners?” It just should not be that difficult, I thought beginning research on the “Housing First PAC.” But, I wondered, is it really a political action committee (PAC) or is it just posing as one? Consulting Florida State’s registered PACs, I found “Housing for Tomorrow,” but no “Housing First.” Then I looked for “Housing First” in a US national PAC data base, discovering a “Housing First” that had operated in some Wisconsin cities and a few other US cities. But all such “Housing First” PACs had been ‘de-registered’ after achieving (or not) their initial objective.

After looking under every potential alternative name for “Housing First,” when I finally called Naja Girard, Co-editor of Key West The Blue Paper to ask where to look next, she suggested the Monroe County Supervisor of Elections’ website (http://www.keys-elections.org/Candidate-Info/Candidates-Finances-Elections-2009-Current). But even then I still could not find what I wanted, namely, a listing of PACs registered in Monroe County. So I called a Supervisor of Elections staff person, who helped me find what I wanted.[i] In addition, subsequently a Blue Paper contributor, “Colby,” sent me this information.   Here’s what Colby and I found: 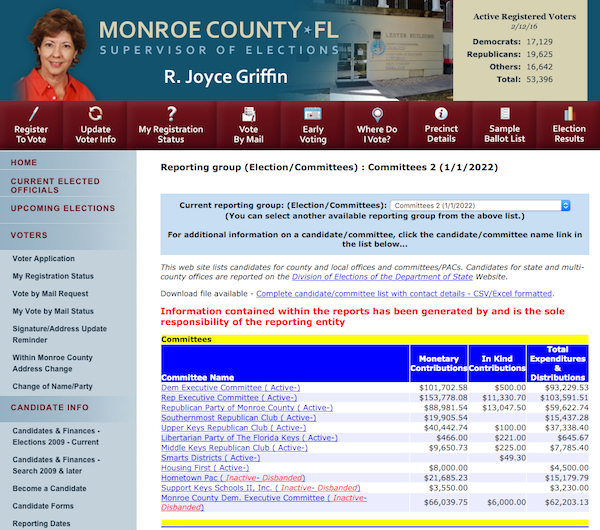 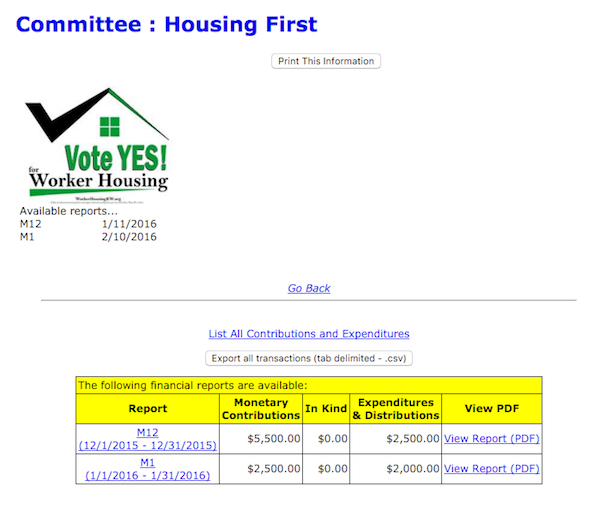 What is Housing First? Donors shape a “Brand.” Housing First received $8,000 in “monetary contributions” between December 2015 and the end of January 2016. The Supervisor of Elections data base reports that, in December 2015, Ed Swift of “Historic Tours of America” wrote a check to Housing First for $5K and Key West City Commissioner and owner of Fausto’ Food Palaces, James Weekley, gave $500. In January 2016, Kate Miano, listed as a “hotelier,” donated $500; Donna Windle, a “realtor” (who lives in Peary Court) gave $500; Kent Ducote, a “realtor,” donated $500; Tony Green & Bryan Konrath, listed as “architect,” donated $1,000.

Although not listed as donors, others mentioned in a Key West Citizen article as affiliated with Housing First, include MaryBeth McCulloch, Maureen Bramlage, Tony Falcone, Mike Mongo, Perry Johnston, Robert Gold, Richard Tallmadge, and Damian Vantriglia.  Thanks to “Wankjam” for sending this information from a Citizen article.[i]

Is “Housing First” a PAC? Does the previous donor list ‘prove’ that “Housing First” is a registered political action committee? I called Monroe County’s Supervisor of Elections, the Honorable R. Joyce Griffin, and asked if she had “any evidence” of the Housing First’s PAC status, her answer: “Do you think I would list it as such if it were not a PAC?” “No,” I responded, but, “I need to be sure, so do you have any proof?” Responding that, “It is not common for me to give out such paper work,” Ms. Griffin kindly did so. Below is page one of three. However, one still wonders why Housing First is not also on the Florida State PAC registry. 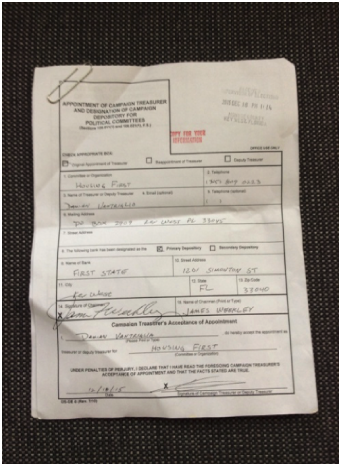 According to the Supervisor of Elections paper work, designated “Appointment of Campaign Treasurer and Designation of Campaign Depository for Political Committees,” Housing First’s Chairman is: 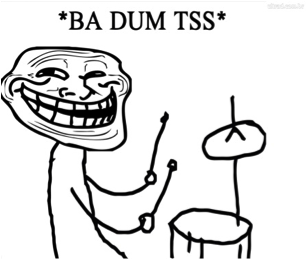 Jimmy Weekley (businessman, owner of Faustos Markets). Is it just me being “fussy,” or do others also feel discomfort at having a Key West Commissioner not recuse himself from all seemingly ‘balanced’ public discussions of the pros and cons of our city government’s purchasing Peary Court? Our “Jimmy” made his position about the Peary Court purchase very clear when he accepted chairmanship of Housing First, a political action committee that, along with and through its citizen action arm, “Worker Housing KW” is strategizing to get voters to allow Key West government to purchase Peary Court “for workforce housing.”

Two things that really do not work for me are: “flash in the pan” fiscal non-planning and government actors’ having dual power to influence voters and not declaring this: Jimmy Weekley, as an elected official, should work for the voters and the City of Key West, and as such ought to be neutral and fiscally rational as possible about the Peary Court purchase. But the Jimmy Weekley who chairs and donates to the “Housing First” PAC has the single-minded objective of influencing voters to allow Key West government—of which Jimmy Weekley is a Commissioner– to purchase Peary Court in order to achieve some allegedly greater amount of, as yet unspecified, ‘workforce’ housing at an exploitatively high price from real estate speculators.

Jimmy Weekley should recuse himself from any public discussions of the city’s purchasing Peary Court, unless he makes very clear to his audience that as Chairman of the “Housing First” PAC, he—a City Commissioner who was voted in to serve all voters’ interests, not just those who could profit from the Peary Court sale—has already committed himself to influencing the March 15 vote toward accepting the City’s purchasing Peary Court.

What is Housing First’s goal? In doing research for this article I discovered that ‘Housing First’ has a distinct meaning among not-for-profit US organizations involved in housing, namely it is “an approach to ending homelessness”–not an NGO or PAC per se. As one organization that is implementing ‘the housing first’ concept states:

One could easily deduce from Key West’s “Housing First” PAC, since they selected that particular name rather than any other, that important objectives of Key West’s Housing First PAC is to allocate some Peary Court rentals to the homeless.

Now the Housing First PAC and its movement are getting my attention. Indeed, I, like many others want homeless people to receive suitable housing in Key West if this is where they want to live. And there’s no time like the present to secure more local housing for people here without dwellings:   The Citizen (2-9-2016) reported recently that the 2016 homeless count in the Florida Keys found a 22% increase in homeless people over 2015.[iii] We’ve got our work cut out for ourselves! Certainly, Housing First’s Chair, Jimmy Weekley has been a vocal proponent for obtaining housing for the homeless. We should be able to feel confident in assuming that Commissioner Weekley supports designating some Peary Court dwellings for people without any housing at all.

However, before I can support any possible Housing First mission,  I need a few more specifics: How does Housing First envision addressing the special needs of the homeless? Would the city provide services for assisting transition to Peary Court? How about rent payments by formerly homeless for Peary Court housing?   Can they even afford to pay a low rent?  (Remember that it is Peary Court rents that are used for paying the interest and principal on the potentially $50 million dollar bank or other loan required to purchase Peary Court). Maybe rent subsidies could be obtained from state and federal government?

If the homeless are left out of Housing First’s grand scheme, then I assume those to benefit from Housing First’s political campaign will be the county and city teachers, firefighters, police, and lower paid workers in our city’s shops, restaurants, bars, on boats, and in other tourism-related businesses. Many of us lean toward “mixed class housing” at Peary Court: better paid workers paying full rent, will live with even more poorly-paid employees (paying partial rent), and with deeply impoverished folks (no-pay homeless). However, I hope that our readers realize that by providing subsidized housing for a large class of Key West workers, our city will be assisting government and private businesses in keeping their wages to workers sufficiently low so as to maximize business profits. Again, I like socialized subsidizing of workforce business needs, as long as such businesses also pay their employees’ health insurance, give paid vacations and parental leaves, and pay into their retirement plans. I am not in favor of government merely enhancing business profits by allowing them to pay workers sub-standard wages.

What’s your Plan, Housing First? How do you imagine “mixed housing” working at Peary Court? What proportion of Peary Court rental units would be available for each of the two or three possible groups of renters? Would the three categories of renters—the homeless, low- and lower-paid workers, and full-price renters– have equal proportions of rentals? Would the two main categories of renters–‘full-pay’ and ‘less-than-full-pay’–each receive half of the rental units? I am sorry to ask Housing First to do what Key West Commissioners and Key West government have not yet done: Explain how their rental plans for Peary Court would be made operational.

Who Supports a ‘Yes’ vote for Key West’s Purchasing Peary Court? Looking only at the current donors to Monroe County’s Housing First Pac, they resemble on a small scale the national profile of those partnering with government to create ‘workforce housing.’ Ed Swift and Jimmy Weekley have businesses that would profit from their workforce being housed nearby at relatively low cost—government -subsidized housing would allow Swift and Weekley to keep workers’ wages favorable to their profit expectations by providing these workers with city-subsidized rentals.

Local and County governments and their elected officials assume that they would benefit from the city government’s economic partnerships with private capital, which, as the pipe dream goes, would bring in corporate dollars and help reduce the need for tax increases. Real estate businesses assume one of them could benefit from becoming the Peary Court rental company; architects and builders might receive government contracts to rehab existing properties; the Key West government might be eligible for federal and state support for affordable housing programs.

While many may assume that the fight for workforce housing is led by “bleeding heart liberals,” in fact ‘affordable housing’ has been a boon for conservative corporate capitalists. Affordable housing developments are associated with the biggest US corporations; their executives have learned that the (Neo) liberal ideology of ‘helping low income people find affordable housing’ is bankable. Take a look at the members of Florida’s Coalition of Affordable Housing Providers (FCAHP); it’s “Members” are typical workforce housing supporters. Among the 80 “Members” of FCAHP, 20 are a combination of ‘property development’ and ‘construction’ corporations. Another 20 “Members” are corporate money lenders, stock traders, and inter-state banks. Fewer numbers are in real estate sales, property management, law firms, and ‘consultants; these together constitute only eleven of FCAHP’s “Membership.” Finally, not-for-profits and local and State government entities, eighteen in all, make up the last category of FCAHP “Members.”

My position: If one wants want workforce housing (“YES”), one does not have to accept that purchasing Peary Court (“NO”) is the responsible way to achieve it. I want local employers to pay their workers a living wage and provide health insurance. I’d like to see affordable housing, but not if the city has to mortgage itself out to big Capital. We must not kid ourselves, in the end the taxpayers—including those who live in subsidized housing– WILL pay for such a scheme.

[ii] This information about the company is likely to be somewhat incomplete. (http://www.manta.com/c/mtvwy07/national-campaign-supply-corporation)

19 thoughts on “The Peary Court PAC: Who Is “Housing First”?”