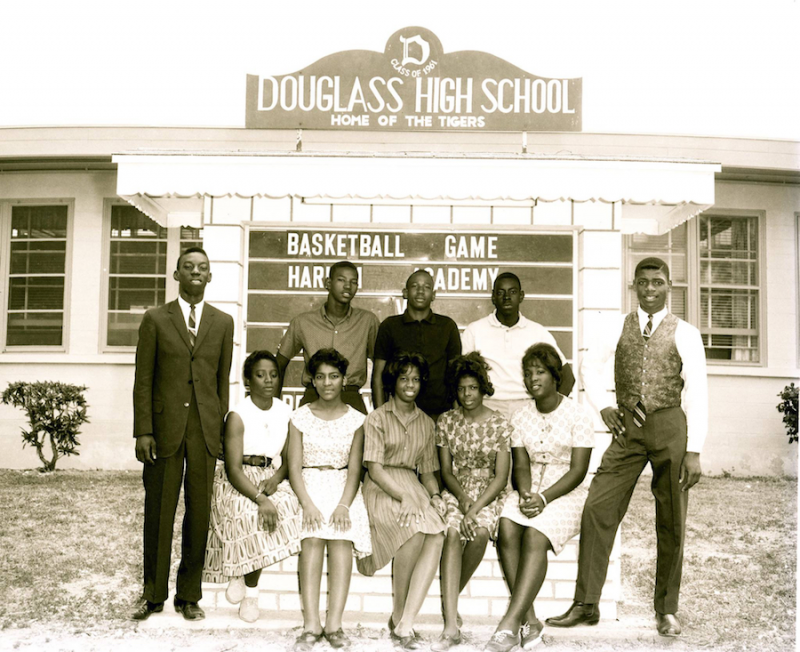 On January 20, 2016, the six (6) members of the City Commissioners voted to approve funding for the “White Boxing” of the Douglass School Band Room & Shop Building and held their vote on whether the building should house the Roosevelt Sands Health Clinic.  The members of the Frederick Douglass School Black Educators Memorial Project (FDSBEMP) had asked for consideration to be given to the fact that Commissioner Clayton Lopez had met with and promised their group over a 5 year period that he would support their efforts to create a museum and cultural center to tell the story of the Indigenous People (African, Bahamian, Cuban, Chinese, African American descent) of Key West, from the mid 1800s – Present.  Those efforts promised by Commissioner Lopez  included securing the Band Room Building for that purpose, and funds for a structural study, and at various checkpoints throughout those years, this promise was affirmed.

City Officials were charged by the City Commissioners, at the January 20th meeting, to “find a space that would satisfy both parties… and to report back with their results in 90 days.”  On Tuesday, April 5th, City Officials presented a Resolution to the Mayor and six (6) Commissioners to vote on approval for the MCHD to take possession of the Band Room immediately.  (See full resolution at City of Key West website.)

City Officials did not carry out the directive that they were given.  They did not come back to the meeting [on April 5th] with any information relative to the task they were given in January.

Instead, they and Commissioner Lopez presented a view of the situation that attempted to prove that the Frederick Douglass Memorial Project group was “adamant” about not sharing the building with the Health Department, that we did not respond to their requests for information, that we were not cooperative, that we made the community feel that we “were against health care” in Bahama Village.  None of that is true, however.  Further, City Officials suggested that they had “met with our group several times,” when, in fact, they met with us once on January 28th.

The FDSBEMP has been made to look as if it is against providing access to public health in Bahama Village.  No, it has never taken that stance or ever considered taking it.  The clinic should have a building, but not the Band Room building, though we have been willing to share it, as we have maintained.  This building belongs to the descendants of the indigenous people.  Aside from the American Legion/VFW Hall, it is the only secular community building they have left on the island that represents their history and culture, and their WELL-BEING, MOST OF ALL.  They have not just lost almost everything that represents them physically, but many have lost hope, many their dignity, their dreams, their sense of respect.  Many of them have come to realize that they have been “sold out” by the very people they hoped would represent them and to do so in their best interest.

Yes, we need a Health Clinic in Bahama Village, but one, also, with a Mental Health component to help, especially, the many of our people who have been  oppressed and looked over, many frightened into becoming wordless, many seeing their dreams shattered in the hopelessness that  their children display, with no avenues for success as they try to live their lives out on the island, and many of them depressed because those who have been selected to represent them do so with impure intentions.  Secondly, we need a health clinic to provide to many of the members of the indigenous groups a place where they could get counseling for drug addiction and abuse so that they and their children may be given a “second chance” to enjoy a better life, on an island that their ancestors helped to cultivate.

With us, this has not ever been a matter of choosing one over the other, of choosing the Band Room for the Roosevelt Sands Clinic or choosing it for the Ellen W. Sanchez Museum and Cultural Center.  It is a matter (1) of rectifying a broken promise by Commissioner Lopez to the group that represented the indigenous People of the Island, a promise not kept, a promise to help our group acquire the Band Room Building for the Ellen W. Sanchez Museum & Cultural Center for the Preservation of Indigenous People of Key West, and (2), of making sure, too, that the Roosevelt Sands Health Clinic has a place to be housed.

The City of Key West owes this building to the indigenous people of the island, this one last building.  It owes it to them, free of charge.  It should be its gift to the people to rectify Commissioner Lopez’s “Broken Promise” and to apologize to the indigenous people for not including them in the vision made for Key West years ago, a vision that excludes them from benefitting in any way from the vast fortunes made based on telling people far and near that “Bahama Village” represents Key West as it was.  After the gym is renovated and PAL moves in next door to the Bahama Village Music Program, their programs will be housed in the final remnants of our people’s history.  Just 4 Kids has the community center building on Truman & Emma Streets, where our parents paid their rent in the 40’s, 50’s, and 60’s and where our Boy & Girl Scout Troops were housed and served as their children’s annual Easter Parade gathering place each year.

The Douglass School Band Room & Shop Building is a “Symbol of Hope for A Community of People.”  Should it that for just One Family?  Should the name of a very small part of our island’s history be preserved, the legacy of the patriarch of the Sands Family, or should a 5-Year Promise, made and broken by Commissioner Clayton Lopez to the members of the Frederick Douglass School Black Educators’ Memorial Project and to the indigenous people of Key West to preserve their culture be kept?  THE ANSWER IS YES TO BOTH.

The Band Room/Shop Building should become the Ellen W. Sanchez Museum and Cultural Center for the Preservation of Indigenous People of Key West, and the City of Key West should make sure that it is included in its redevelopment plans for Bahama Village, either shared with the Health Department or housed in the space alone.

”It is alright to go back for that which is forgotten.”  (Ghanaian saying)