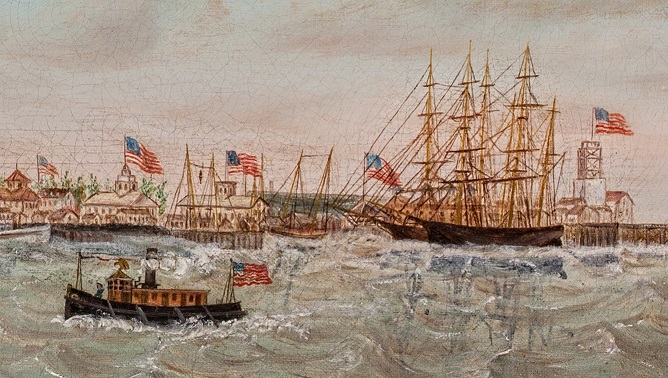 Detail from a painting by I.H.F. Düksen depicting the 1874 “Virginius Affair” – a scantly-examined incident in American history that almost resulted in a war with Spain. On Friday, July 28, from 5:30-7:00pm, Key West Art & Historical Society invites the public to a champagne reception and viewing of the artwork at the Custom House Museum where it will continue to be on display, forming part of “The Navy in Key West” exhibit, which runs through December, 2017. (Image courtesy Key West Art & Historical Society)

On Friday, July 28, from 5:30 – 7:00pm, Key West Art & Historical Society welcomes the public to a champagne reception and presentation of “The Virginius Affair,” the only known painting that depicts an unprecedented show of naval force that helped postpone war between the United States and Spain in early 1874.  As part of the champagne reception, Florida Keys historian Tom Hambright will offer brief observations about this extraordinary painting by I.H.F. Düksen that evening in the Bumpus Gallery at the Custom House Museum, 281 Front Street.

“The Virginius Affair is a scantly-examined incident in American history that almost resulted in a war with Spain,” says Society Curator Cori Convertito, Ph.D. “Essentially, if we went to war in 1874, the United States would have had a difficult time winning due to its outmoded naval fleet.  Instead, the country decided to send a large number of navy ships to Key West to flex its muscles in front of the Spanish who ruled Cuba, the site of the incident that sparked the Affair.”

Hambright, from the Key West Library’s Florida History Department, will give a brief account of the Virginius Affair in the Bumpus Gallery of the Custom House, calling particular attention to specific elements of the painting.  Tickets or reservations are not required to attend.

The painting is timely in its arrival as The Society is currently celebrating the connection between the U.S. Navy and the island of Key West with a Custom House Museum exhibit, ‘The Navy in Key West,’ which runs through December 2017. Held in conjunction with the 100th anniversary of Naval Air Station Key West, the exhibit explores how the island and the navy have relied on each other by highlighting unique images, artifacts, uniforms and military memorabilia along with interactive displays for learning about Key West’s maritime past.

“The painting helps visitors examine how strategic Key West was during the time of the incident, and just how hectic the port was, particularly during military engagements,” says Convertito.

While the presentation, reception, and entrance to the museum are all free during this special event, donations are appreciated to help support The Society’s exhibits, programs, and events.

For more information, contact Curator Cori Convertito, Ph.D. at cconvertitofarrar@kwahs.org or 305.295.6616 x112. Your Museums.  Your Community.  It takes an Island.