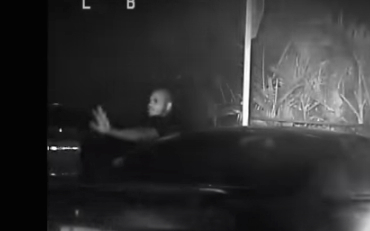 The Monroe County Sheriff released video of a gun battle that took place weeks ago on Stock Island. [See video below]

Dashcam from two deputies’ cruisers show the October 24th high speed chase of Timothy Thomas, who was wanted in connection with an armed robbery in Key West.

In the video Thomas drives a stolen Ford Mustang over 70 miles/hour down a Stock Island narrow street. The car then speeds out of control and slides into a fence at the corner of 3rd Avenue and Sunshine Street.

Deputy Gordon with weapon drawn approaches the vehicle. Thomas partially exits with left hand in the air as if surrendering but a second later crouches down and opens fire, hitting Gordon in the chest. Gordon falls on the ground, saved by his bulletproof vest.

The dashcam from Deputy Lariz’ vehicle shows him arriving at the precise moment when Gordon is on the ground retuning fire. Lariz also open fire on Thomas.

Incredibly enough in spite of this hellfire of over 30 rounds of ammunition, Thomas managed to free his car and escape. Deputy Gordon, who had just narrowly escaped death, jumps in his patrol car in pursuit.

Thomas’ car was found empty two blocks away. With gunshot wounds to the back and shoulder, Thomas surrendered after being surrounded by KWPD officers the next day in a house on VonPhister Street in Key West.

The Sheriff had initially rejected the Blue Paper’s request for the video footage claiming the video was exempt as part of an ongoing investigation. However on Thursday morning, during Bill Becker’s Morning Magazine show on US1 Radio, Naja Girard announced that The Blue Paper would report on the incident and would include Timothy Thomas’ version of the event. [In the police summary Timothy Thomas is reported as stating multiple times that deputies had shot at him first.

In reaction, Monroe County Sheriff, Rick Ramsey decided to release the video on Thursday, not to the Blue Paper, but rather to another local news outlet.

The video, shared with the general public early Friday morning only after The Blue Paper had published, clearly discounts Thomas’ claim and shows the heroic reaction by Deputy Gordon who continues trying to apprehend Thomas, even after suffering a blow to his bullet proof vest so violent that he had been thrown to the ground on his back.

However, Sheriff Ramsey has been playing games with public records law, deliberately continuing to deny the Blue Paper its public record request for the video after passing the video over to a different news outlet perceived to be more favorable to the Department. [See, The White, the Black, the Blue and His Dog – a Blue Paper documentary exposing a pattern of racial profiling by deputies during a special drug trafficking operation]

So the next question is going to be whether Sheriff Ramsey violated Florida Statute 119, which makes bad faith handling of public records requests by a public official a misdemeanor of the first degree.