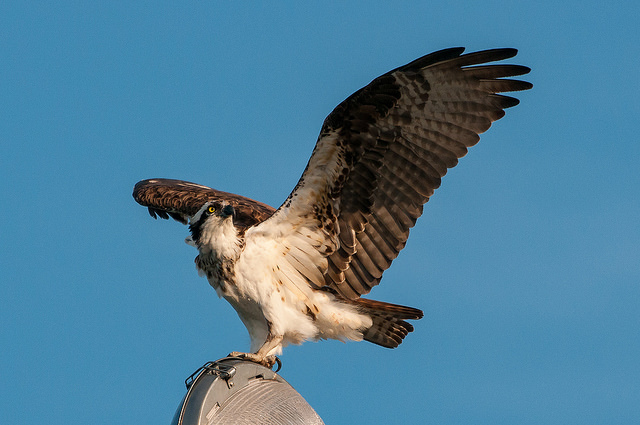 After a more than a month of rehabilitation, the osprey that was shot off the mast of the US Cutter Ingham in August had to be euthanized this morning following a scheduled examination that showed serious medical problems, the Key West Wildlife Center reports.

“It is with sadness we must report that the Osprey recovering from injuries sustained during a pellet gun shooting on August 30 at Truman Waterfront developed necrosis complications. The bone tissue at the fracture site was dying and was likely to cause systemic problems. After a quick rescue response by our center to get the bird to Marathon Veterinary Hospital for surgery, and after a brilliant surgical procedure by Dr. Natasha and Dr. Doug Mader, the difficult choice was made to euthanize the bird this morning. Following a hopeful monthlong rehabilitation, the condition was discovered today during a scheduled examination in Marathon. Thanks to everyone who made such an effort to save this bird and try to return it to the wild,” Tom Sweets of the Key West Wildlife Center reported.

The osprey is protected by the U.S. Migratory Bird Treaty Act and as a State Species of Special Concern (in Monroe County only) by Florida’s Endangered and Threatened Species Rule.

Josiah Fetzer, 22, who was working at the museum, was charged with two second-degree misdemeanors (possess/transport/sell a species of special concern and violation of the Migratory Bird Treaty Act) after telling officers he shot at the bird with a BB gun in an attempt to get it off the mast.

He is due in court again November 1.