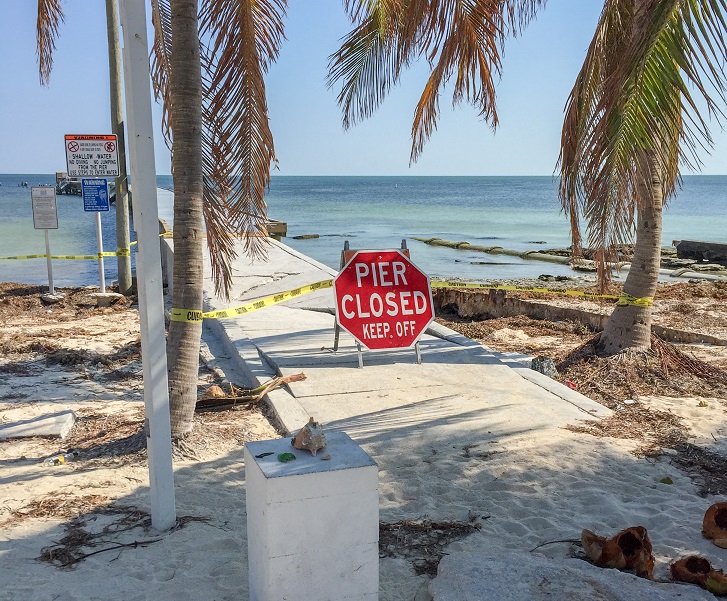 The Reynolds Street Pier at Higgs Beach in Key West is closed due to damage from Hurricane Irma. Photo by Monroe County Public Information.

Most of Monroe County’s parks, boat ramps and museums from Key Largo to Key West suffered damage due to Hurricane Irma. Most remain closed to the public. Here is an update:

Higgs Beach: It will reopen Saturday, Oct. 7.  The restrooms will close at sunset until further notice. Higgs Beach’s Reynolds Street Pier will remain closed to the public. Parts of the pier were destroyed by the storm and will need to be rebuilt.

The storm caused mounds of sand to be pushed onto the tennis courts and streets. The sand that was salvageable was returned to the beach, but some of that sand was swept into the water by recent king tides.

Handrails along the seawalls were destroyed and will take time to be replaced. Beachgoers are asked not to use the seawall steps and to be mindful of the rocks that are no longer covered by sand.

Two pavilions in the dog park and one pavilion on the beach were destroyed, and have been removed.

The museum and garden that is owned by the County and operated by the Key West Garden Club will remain closed until further notice. The museum, which is on the U.S. National Register of Historic Places, suffered major damage to large trees, the beautiful landscaping and building.

East Martello Museum: This museum may open as early as Sunday. Stay tuned. 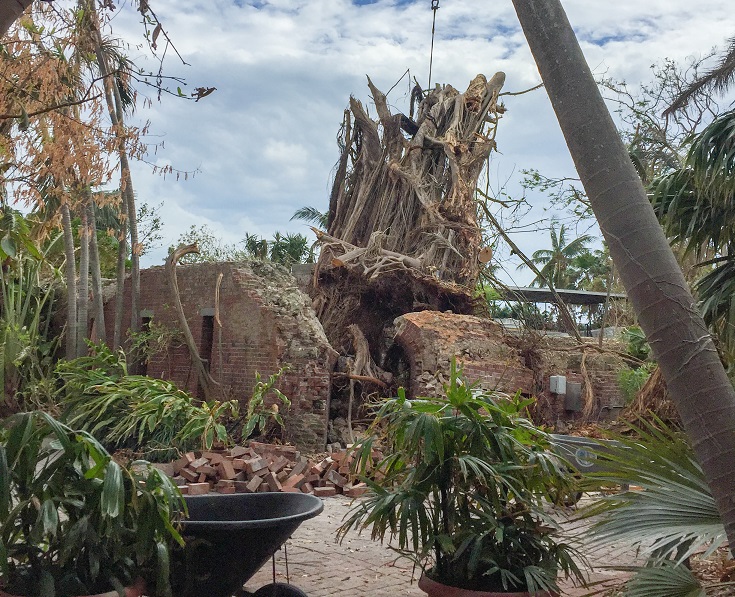 Every structure on the Island sustained damage – some minor some major.  Before hurricane Irma struck, the only access to the island was by boat due to the bridge repair work. During the storm, the dock sustained severe damage and is unsafe for use. The Gang Quarters sustained siding damage and the loss of the South end porch. The Commissary was knocked off its foundation and is severally damaged.  The Honey Moon Cottage was also knocked off its foundation and also sustained severe damage. The Bridge Tenders House, the Assistant Bridge Tenders House, the Paint Foreman’s House and the Assistant Paint Foreman’s House all suffered roof damage.  However, the roof of the Section Gang Quarters House (main dining hall) sustained no structural damage. This roof was replaced by Monroe County Project Management earlier this year. The Bridge Foreman’s Home sustained minor structural damage. A full effort to stabilize and restore all historic structures is being made. This will take several months.

Friendship Park, Key Largo: Closed until playground can be inspected for safety.

Key Largo Community Park: Pool is open but rest of park is closed until further notice to repair damage to make it safe.

Harry Harris Park, Tavernier: Closed. The boat ramp, kid’s playground and beach areas were destroyed. The jetty washed away with severe erosion that is causing sea water to come across the road. This park will remain closed for months and maybe a year for repairs to be completed.

One Response to “Update on Monroe County’s Parks, Boat Rams and Museums Damaged by Hurricane Irma”