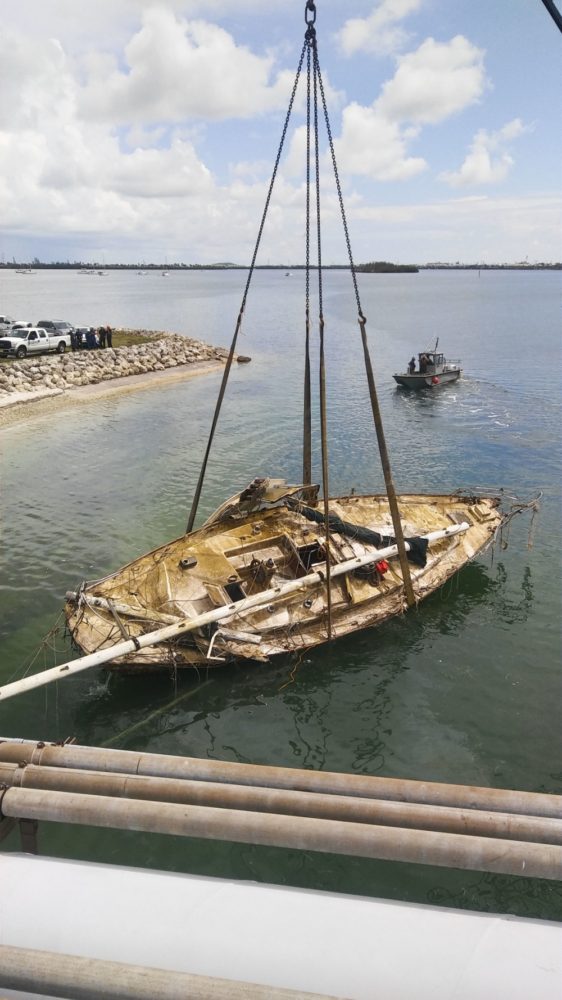 A sailboat displaced by Hurricane Irma is hoisted near the Fleming Key Bridge in Key West, Florida, Sept. 28, 2017. Members of the Coast Guard and Fish and Wildlife Conservation Commission conducted assessments and formulated a plan to raise the vessel without presenting a danger to the environment or responders on scene. U.S. Coast Guard photo.

MIAMI — The Emergency Support Function 10 (ESF 10) Florida, a Unified Command consisting of multiple state and federal agencies, has initiated removal efforts prioritizing vessels displaced by Hurricane Irma which are actively polluting or creating a hazard to navigation to traffic in the area.

“The expanse of coastline affected by Hurricane Irma is logistically challenging,” said Hanson. “Having partners like the FWC, FDEP and EPA as part of the leadership of this response gives us the local knowledge and resources necessary to form an effective response to this situation.”

Currently, response teams are conducting assessments of the most affected areas to include the ports and waterways from Jacksonville, Florida to Miami, Key West, and around to St. Petersburg and responding to instances of pollution or released hazardous material as they are reported.

As the Florida Keys open for tourism on Oct. 1, visitors are encouraged to stay away from vessels displaced as a result of Hurricane Irma. Hundreds of the vessels damaged or sunken as a result of the storm present a hazard to health and safety. Boaters in the areas affected by Hurricane Irma are advised to transit with all due caution and report hazards to the Coast Guard Sector Key West command center at 305-292-8727 or 305-292-8729.

A National Oceanic and Atmospheric Administration chart displays the geographic area encompassed by the Miami Branch of the ESF 10 response to Hurricane Irma and the points of concern being addressed in that area.

Vessels assessed: 364
Vessels removed by citizens: 3
A sailboat has been removed near the Fleming Key Bridge.

Vessels assessed: 207
Vessels removed by citizens: 48
Crews have successfully mitigated pollution from a leaking motor yacht and are enacting a plan for removal.
A National Oceanic and Atmospheric Administration chart displays the geographic area encompassed by the St. Petersburg Branch of the ESF 10 response to Hurricane Irma and the points of concern being addressed in that area.

Vessels assessed: 185
Vessels removed by citizens: 46
A plan to remove 10 displaced vessels at Goodland Bay and three displaced vessels from Hurricane Bay in Fort Myers is being developed.
A National Oceanic and Atmospheric Administration chart displays the geographic area encompassed by the Jacksonville Branch of the ESF 10 response to Hurricane Irma and the points of concern being addressed in that area.

Vessels assessed: 99
Vessels removed by citizens: 19
Oil Spill Response Organizations are booming off two vessels at the Bill Dye Marina after an oil sheen was observed by assessment teams emanating from two vessels.
A National Oceanic and Atmospheric Administration chart displays the geographic area encompassed by the Florida Key Branch of the ESF 10 response to Hurricane Irma and the points of concern being addressed in that area.

Pollution mitigation continues as vessels determined to be leaking hazardous materials are identified.
“The assessment portion of our response is ongoing, but we’ve reached a point where we can begin facilitating the removal of vessels in a manner that is both safe for our responders, while having minimal impact on the environment,” said Franco. “As in previous stages of our response, our priority continues to be the well being of our responders and the Florida citizens affected by Hurricane Irma.”

The ESF 10 is the framework by which federal support is coordinated with state agencies in response to actual or potential oil spills or hazardous material releases. Partner agencies, including National Oceanic and Atmospheric Administration, Florida Keys National Marine Sanctuary are contributing expertise and experience to the assessment efforts.