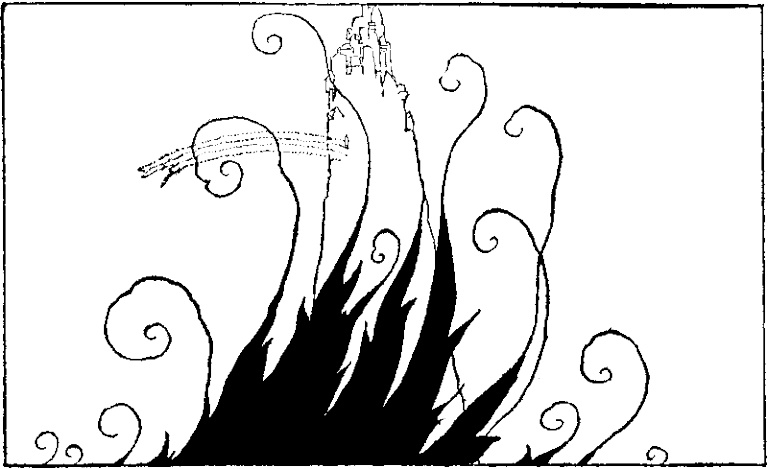 Translated from Old Norse, Ragnarok means “Fate of the Gods” or, if you prefer Ragnarokkr, “Twilight of the Gods.” What happens during Ragnarok in a nutshell, or a nøtteskall in Norwegian, is this: an epic battle ensues, many of the major Norse gods die, and our world suffers numerous natural disasters (the sun turns black, steam arises, flames torch the heavens, that sort of thing) and ends up being submerged in water. (Why does this sound so familiar?) Then, eventually, the world surfaces again, renewed and fertile, and the two surviving humans—who can apparently hold their breath for an incredibly long time—repopulate it. This is, I assume, great fun for Lif, the male; for Lifthrasir, the female, not so much. The world record for giving birth, according to Guinness, is 69, achieved by a Russian peasant woman in the 1700s who had sixteen pairs of twins, seven sets of triplets, and four sets of quadruplets. Lifthrasir would have to be much more productive than that. One hopes she might persuade the surviving gods, if any, to relieve her birthing burden by doing the fashion-figure-out-of-clay-and-breathe-life-into-it thing that supreme beings can purportedly do.

According to some, Ragnarok should have happened already. The Jorvik Viking Centre (in York, England of all places) expected it to occur on February 22, 2014, based on Viking calendars. Putting aside that “minor” miscue, though, the Jorvik provides some interesting information on the Vikings. One, they used to raid church properties in the Viking Age (800 to 1500 AD) because that’s where the money was, and two, they often sold prized ecclesiastical articles back to the “stolees.” So, along with being the people that populated and civilized the entire known world (my theory, yet unproven, but many people have told me it’s true), the Vikings also invented the medieval version of ransomware—let’s call it, “ransomillage” [collecting ransoms via pillage rather than software].

When you search for “Ragnarok” on the Jorvik website, zero results pop up. The center, apparently, has learned its lesson. So, no further enlightenment there re the end of all things. I did, however, discover the Viking Festival 2018, an event in February that commemorates the “arrival and conquest of England by the Great Viking Army in AD 866.” The celebration includes “living history encampments, walks, talks, tours and of course, dramatic combat performances.” Given my Norwegian background, I’m not sure I can pass up an opportunity to attend the Viking Banquet Experience (“special themed menu”) or observe (or, dare I?, enter) the Annual Strongest Viking Competition. That’s assuming, obviously, that Ragnarok does not rear its ugly head before then. Perhaps, in preparation for the world’s finale, the Jorvik should add some participatory events to its festival. There could be things like a rooster-crowing contest, wolf wrestling, Loki-escape demonstrations, and battles of wits, all of which supposedly play a role in Ragnarok.

Sadly, Thor dies in the Norse mythology version of Ragnarok. While besting the giant serpent Jormungandr, he gets poisoned and expires after walking nine steps. I haven’t seen the movie but, somehow, I doubt he suffers a similar fate in it. Hollywood has its own mythology, namely, that of the “happy ending,” which is achieved, as I discovered via Finlo Rohrer’s “Why the obsession with happy endings?,” through the process of happyendification. Oddly, I’m not put off by this. I don’t view it, as some do per Rohrer, as “fundamentally crass, a sign of the excessive commercialization of the concept of story, of pandering to our weaker side.” Rather I’m wondering how we might apply it to the real world. We could use a little happyendification right now, especially given how certain here-unnamed oafish leaders appear bent on creating their own version of Ragnarok. Given that we are certifiably inept at nonfictional happyendification, we would have to rely on, as the ancient Greeks did, a deus ex machina, which raises the thorny question, “Who you gonna call?” My vote goes to Doctor Who. Trouble is, the only way to get in touch with him is through “a crack in the skin of the universe” and the only way to create such a crack is to reboot everything in existence…which is exactly what Ragnarok will do.

Well, who knew? The wished-for happy ending was staring me right in the face and I didn’t realize it. That’s a relief. Now I can put aside all existential angst and focus on the next major concern, which is lunch. Best of luck, Lif and Lifthrasir. Let’s hope you make a better job of it than we did.

Image: The twilight of the gods showing Asgard in flames and the rainbow bridge Bifrost broken (by Willy Pogany, 1920). Public domain.