After watching PBS Great Performances’ “Hamilton’s America,” which is indeed great if you want to get a good feel for the show and its historical background, I started to get ideas. From the bits we saw, Hamilton looks fabulous. But it’s also so, like, yesterday even if the guy, Hamilton that is, pretty much created the country we live in today. Kudos and all that. But we need a modern musical that captures the trials and tribulations, the successes and failures, the flawed and the sterling bits of a current leader of similar stature, say, our president Donald John Trump, or DJT. Getting this show on its feet would be so easy because DJT could write it, produce it, direct it, star in it, and promote it, all the while maintaining his firm grip on the reins of his, er, this nation.

No need to hold your breath in anticipation. POTUS in his wisdom and greatitude is already around the bend, sorry, ahead of the curve on this. According to as-reliable-as-you-can-imagine White House sources, DJT has written his own musical story, Trumpilton, modeled after its megahit predecessor. He’s confident that his work will be more huge, of course. Many many people, thousands, millions maybe, have told him this. He is also, sources claim, thinking about announcing (“I’ll let you know…very soon”) that he wrote his musical before Lin-Manuel Miranda and that his top-secret draft got leaked from Trump Tower and Miranda got wind of it and copied from him. Don’t believe Trumpiltonexists? Well, here’s proof. Thanks to an incredible progression of stupendously serendipitous events, I’ve managed to get my hands on the opening number. Not surprisingly, it is a rap song (sort of) and, if you’ve seen Hamilton, might sound more than vaguely familiar in places. But, hey, enough from me. With no further ado, I give you Trumpilton‘s opening song, titled, naturally, “Donald J. Trumpilton.” The curtain rises, the lights come up, the characters step forward, and we begin.

How does a rich man, a showman, a nannied man
Born in the posh life, raised by the 1%
become White House docent, sorry, US president
leader—I can’t breathe, help me breathe—today
and tomorrow, maybe, of the fricking free world?

I can’t explain it.

I need a drink of water.

Atlas shrugged, I guess, and left this mess. Poor us.

What was the question?

Beats the heck out of me.

Just leave me alone with him,
Put me in a room with him,
I’ll make him cry, hope to die, maybe have to pants the guy
or throw him off a bridge will I
but I’ll get an answer from him
if you’ll be my friend and call me slim
you’d better effing call me slim
understand?

I know What Happened
who better than me
to spread such vitupery
read all about it
I write the wrong, I write the wrong
bang the gong
of injustice, all I got, just this
but you can know, too,
just join my village crew
for just a ten and a twenty
free shipping and delivery

Don’t listen to them. Listen to me. 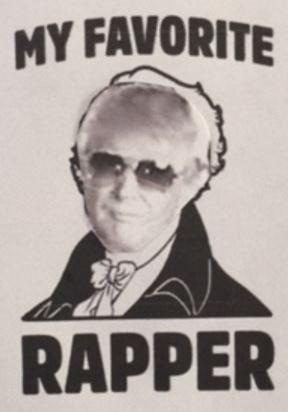 After all, I’m the one who’s covfefe!
Who am I, you ask? And why do I bask
now and tomorrow and forever
in the limelight of history
Because I’m the greatest, that’s no mystery
I’m the hugest, I’m the bestest
and that’s not fake news.
They tried to stop me, tried to win
with dead voters and straw boaters
crybabies and liebabies
Russian spies and clamped-down thighs
Let them weep, let them bellow
they’re just losers made of Jell-O.
I won, suck on that, I won, I’m not fat
I won, stop your whining, I won, you won’t be dining
with me ever ’cause you’re not clever, no cake for you, woo hoo!
because I won, I won, Donald J. Trumpilton,
that’s right, you may regret it but don’t forget it
ever…if you know what’s good for you
so, where you from, huh?
got a birth certificate, huh?
I know where you live, duh
and who’s this Hamilton? What’s all the fuss?
Dude got run over by the Aaron Burr bus
I like winners and he’s not one
just some dork who can’t aim a gun
I bombed Iraq, I bombed Yemen
while sipping ice water braced with lemon
Or was it Syria? I’m a little blearia…whatever
I bombed, that’s what matters, put the world in tatters
I bombed, hee hee, and he, Alex you-know, just caught a slug, his mortal blow
LOSER!
Burr’s the winner, don’t you know
He’s the one deserves a show
WRONG!
sing about me, only me
and those who think otherwise
can go piss up a tree
Hee hee hoe, hee hee HEEEEEEEEE!

That’s it. Lights fade to thunderous applause. Curtain falls. “Donald J. Trumpilton” is the opening song and the closing song. On the original cast album, the song just loops and plays over and over again. DJT is not about to forget the secret to his success. DJT intends, according to another White House source, to put the box office receipts from Trumpilton into a foundation that assuages orphans, people living on the street, and rejected refugees with dessert. Not just any dessert, mind you, but “the most beautiful piece of chocolate cake you’ve ever seen.” I’m sure it will be much appreciated, if they ever see a crumb, that is.