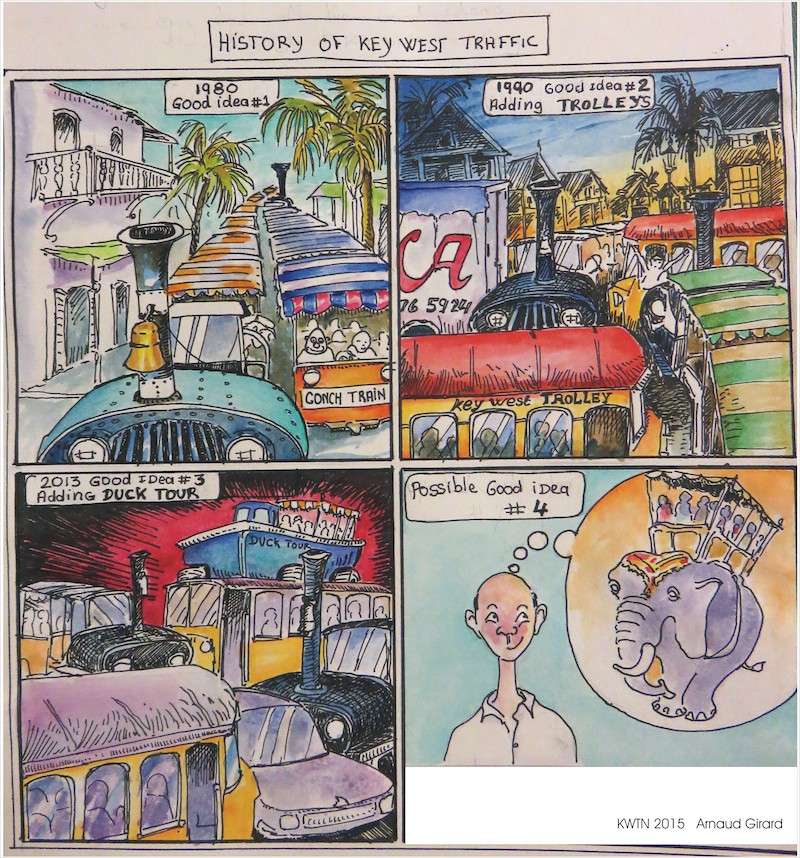 As the “Conch Train” slows down at the corner of Eaton and Elizabeth, the conductor blows the whistle. The train’s blaring PA system floods the street:

“That’s right folks, you just made it to the top. Key West’s highest point, Solaris Hill! 18 Feet above sea level! That’s where you would want to be in a hurricane!” Resident Bob Sanders says he hears that pitch over and over, all day long.

There have been many other complaints about sightseeing busses, trolleys, and trains in Key West. Some say they’re too slow and impede traffic; they’re too loud and historically inaccurate [Solaris Hill is not on Eaton Street]. Others claim there are too many of them; they are too big. There is even a song by a local band proclaiming “The streets are too small for the Duck Tours , please!”

A new ordinance is needed to “protect the quality of life of residents while allowing competitive commerce,” wrote Commissioner Teri Johnston in 2009, about the growing number of sightseeing vehicles in Key West. 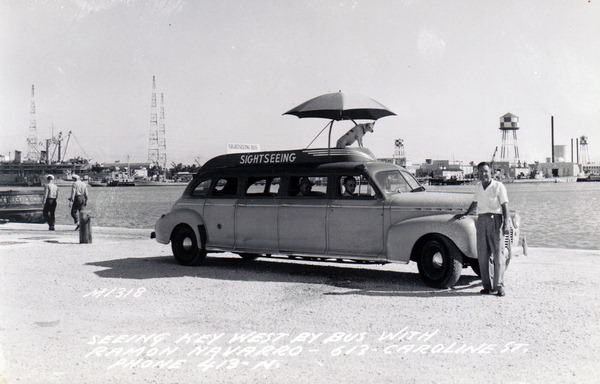 Key West’s first tour operator was Ramon Navarro. He had an old beat up clunker but it was all the rage as Navarro’s dog Teddy would sit on the roof during rides, shaded by his own personal umbrella.  Photo: State Archives of Florida, Florida Memory, https://floridamemory.com/items/show/159479  (circa 1940)

The City Commission will decide on new regulations on September 30th. The City is treading carefully – especially where “Duck Tours” are concerned, the first encounter with the amphibious vehicles spelled financial disaster – that was in the 1990’s.

All sightseeing business in Key West at the time was under the control of HTA and local businessman Ed Swift. Enter “Duck Tours Seafari” offering a ride through the City Streets before splashing into the harbor. The Blue Paper at that time had a headline: “Ed! Duck!” But Ed Swift didn’t duck!

The City makes over $400,000/year from the HTA franchise agreement. The Commission did move to protect their “partner” but they went a little bit too far. They criminalized infringement of the sightseeing monopoly, and sent their police to arrest the Duck Tour captains and impound their vehicles.

In a closed-door meeting, they directed then City Attorney, Diane Covan, to “grind them (Duck Tours) into the dirt.” John Murphy’s Duck Tours Seafari sued under antitrust laws and won a 13 million dollar verdict. The City settled during the appeal process for 8 million in 2010.

There are now two applicants for sightseeing franchise agreements: City View, which took over Duck Tours Seafari, and Historic Tours of America/Buggy Bus, Inc. (HTA). Both City View and HTA hoped to launch lucrative amphibious vehicle (Duck Tour) operations, but the Navy took back the boat ramp they planned on using at the Truman Waterfront.

Both companies are also fighting the franchise ordinance drafted by the City.

For those residents who no longer want to be stuck behind the Conch Train moving below 15 mph on Fleming Street or White Street, the new ordinance, (which made it through the Commissions’ first reading) makes the following provision: “No operator of a sightseeing vehicle (…) shall drive at such a slow speed as to impede or block the normal and reasonable movement of traffic. The route should avoid residential side streets.” But HTA wants the word “impede” removed, the tour vehicles would only be in trouble if they “block” traffic. That would mean another 10 years at 12 mph behind a Conch Train.

HTA and City View both dislike a provision that limits the passage of tour vehicles to one per hour on residential side streets.

The Commission also approved a provision that prohibits any sound (narration) from being audible from outside the vehicles. The idea is that passengers could be accessing the narrative using headphones or through the use of Bluetooth technology and their smart phones.   But the tour companies find the requirement impractical and want only to discuss “sound reduction plans” at a later time with the City Manager.

Finally the ordinance doesn’t prohibit the new oversized HTA Ducks, which are 40′ long and almost 12 feet high, from riding up and down Key West’s streets; requiring only (vaguely) that they take the largest and safest streets “possible.”

The total number of vehicles is not fixed. HTA currently has 39 tour vehicles. City View suggests letting the “market control how many vehicles are necessary.” It will be interesting to see how much traction that “free market” argument receives on the dias when it concerns these large sightseeing companies considering how the City has dealt with the same issue when it comes to independent Uber drivers.

The franchisees will be required to have 10 million dollars in insurance coverage and will pay the City $7,500 per vehicle or 5% of the gross receipts, whichever is greater. The tour companies oppose logging their passengers, which seems the best way to audit those payments. City View opposes the 10 million dollar insurance requirement. However, after a Duck Tour vehicle’s catastrophic capsizing on the Delaware River in 2010, the death of two passengers was settled for 15 Million dollars and the Duck Tour vehicle that crashed into a tour bus yesterday in Seattle caused 4 deaths and multiple injuries.

A prudent City Commission will need to balance the quality of life issues with the realities of commerce.  The second and final reading of the ordinance is set for a September 30, 2015 City Commission meeting. 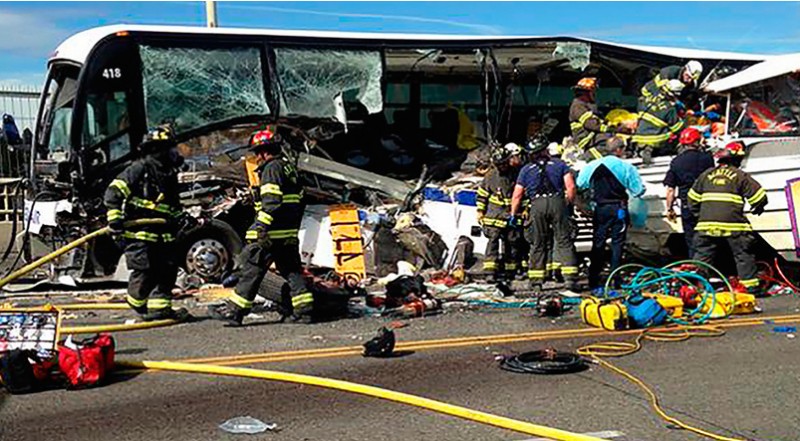