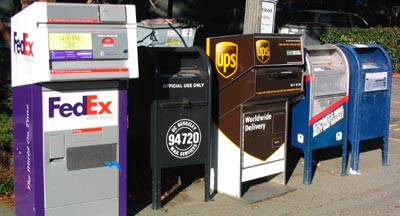 Image taken by User: Minesweeper on December 14, 2003 and released into the public domain. From left to right, the post boxes belong to FedEx Corporation, University of California, Berkeley, United Parcel Service, and two from the United States Postal Service (the one on the left is for Express Mail only) (Photo credit: Wikipedia)

Like most monopolies, the US Postal Service isn’t interested in changing its business model. An enterprise hemorrhaging cash in a free market would cut prices, improve service, look for new revenue streams, or simply close its doors. The USPS solution, as usual, is to raise prices and hope for the best.

Alternative proposal: Let’s put it out of its misery.

The Service posted losses of $562 million in the first quarter of 2017, the Associated Press reports. This year will likely bring the Service’s sixth straight annual operating loss. While its package delivery revenues have grown, the areas in which it enjoys a monopoly — “first class” (letter) mail and “marketing” (junk mail) — are in decline thanks to the ascendance of email and other Internet technologies.

That decline is terminal. The age of hand-delivered paper mail on the scale required to sustain the Postal Service model is coming to an end, and the market is already well-situated (via the likes of Federal Express and United Parcel Service) to handle ever diminishing future levels of emergency and vanity traffic of that kind.

In truth, we’ve known for nearly 175 years that the Service’s government-granted monopoly is all that keeps it afloat. Its prices don’t reflect the market value of its services. In 1844, anarchist Lysander Spooner founded the American Letter Mail Company and turned a profit selling stamps for 6.25 cents each or 20 for a dollar versus the Post Office’s price of 12 cents, delivering mail up and down the eastern seaboard until the federal government shut it down.

In the past, one excuse for a government monopoly on mail was to protect “universal service.” Spooner could make money serving Baltimore, Philadelphia and New York, but the government’s postal monopoly used those “easy” routes to subsidize letter delivery to, for example, rural Kentucky and distant San Francisco, where private competitors would have had to charge prohibitively high rates.

Today, however, nearly all US households have telephones (cell or land line). According to the Pew Research Center, 84% of American adults use the Internet, and most of the rest COULD use it. Even with no home connection, they could visit the library or any of numerous free wi-fi locations, just as citizens of rural communities once visited the Post Office to pick up mail in the absence of home delivery.

If the Postal Service shut its doors today, taxpayers would still be on the hook for generous retirement and retiree health care commitments to its current and former employees. That’s no reason to keep throwing good money after bad forever.

Neither is our natural nostalgia for the big blue corner mailboxes and the friendly neighborhood mail carrier.

Let’s say goodbye to what’s clearly become a relic of a bygone age.

46 Responses to “The US Postal Service is Dying. Let it.”