In the opening moments of “Listen,” the fourth episode of Season 8 of the revived Doctor Who series, the Doctor, alone and killing time, asks himself and answers this question: “Why do we talk out loud even when we know we’re alone? Conjecture – because we know we’re not.” The Doctor further conjectures that there are entities with the perfect ability to hide, except when they don’t want to hide, and that those creatures might be the ones we envision living under our beds, making sounds in the dead of night, and reaching out to grab our ankles when we get up to use the bathroom. (In my case it was evil, malicious versions of mechanical maid Rosie the Robot from The Jetsons living in my closet. This fear began, believe it or not, with a dream I had under anesthesia while having my tonsils excised.)

It appears, given this episode of Doctor Who, that even Time Lords are afraid of the dark. This is a common fear, sometimes a phobia (scotophobia, nyctophobia, or lygophobia), among children. It has to do not so much with being scared of the dark but being terrified of possible or imagined dangers lurking therein. It seems we do more to encourage this fear rather than discourage it with “entertainments” like the Nightmare on Elm Street series and, on the lighter side, Monsters, Inc. Some think this seemingly irrational fear is a good thing. In “Listen,” time-traveling Clara tells the young Doctor, who’s cowering under his bed covers, that “it doesn’t matter if there is nothing under the bed or in the dark so long as you know it’s OK to be afraid of it…. Fear can bring you home…. Fear makes companions of us all.” She tells another child earlier that “fear is a super power. Fear can make you faster, and cleverer and stronger.”

Some real-life humans agree with that. In “There’s an Evolutionary Reason Why We’re Afraid of the Dark,” Josh Hrala writes that “our fear of the dark is an evolutionary trait that we picked up to survive real-life predators stalking the night.” Today, he goes on, instead of lions and tigers and bears (oh my!) looking to eat us, we imagine monsters to “fill the predator void.” “Though we don’t technically need this fear,” he continues, “it’s still here.” Hence, our penchant for night lights, leaving lights on, or leaving the bedroom door open to let in the hallway illumination. 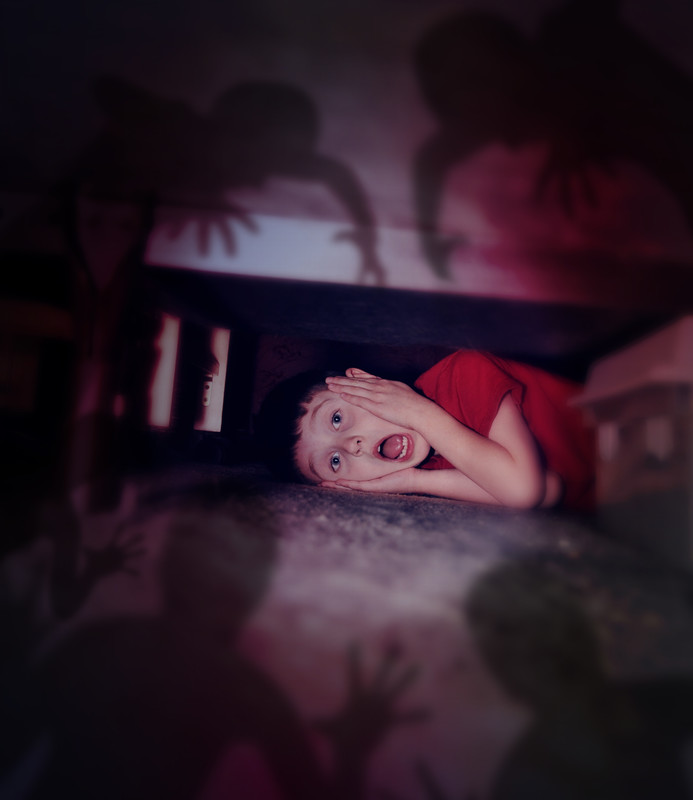 This is all very well (or not), but I’m still intrigued by the Doctor’s idea of an entity with the perfect ability to hide. The Doctor expounds on this:

Yes, you know sometimes when you talk to yourself? What if you’re not? What if it’s not you you’re talking to? Proposition: what if no one is ever alone? What if every single living being has a companion? A silent passenger—a shadow? What if the prickle on the back of your neck is the breath of something close behind you?

What if, in the dark, that companion lives under our Sertas and Tempur-Pedics and Sleep Numbers? As Clara says, “the space under your bed is what’s behind you at night.” In one part of “Listen,” she encourages a young boy to crawl under the bed with her to show him that nothing, no one is there. The boy does. Then, without warning, the bed springs above them creak and sag. Someone, something had just sat, or materialized, above them. They crawl out and see a shape under the bedspread, one that begins to rise up as they look at it. Just at that moment, the Doctor tells Clara and the boy to look away and they all do. He then tells the whatever under the covers to go in peace, that if it wants to stay hidden that’s okay, just leave. It does, and the boy looks back and complains, “He took my bedspread.” “Oh, the human race,” the Doctor exclaims in reply, “You’re never happy, are ya?”

The Doctor may have something there. Maybe “you’re never happy” is the real monster under the bed, the one that keeps us awake at night as it “ticks and creaks and breathes,” waiting to reach out and grab our ankles. I think I’m safe from it, though, since we have drawers under our bed and nothing can reach out. The closet, however, is another matter. Let’s not go there, shall we? At least not in the dark.