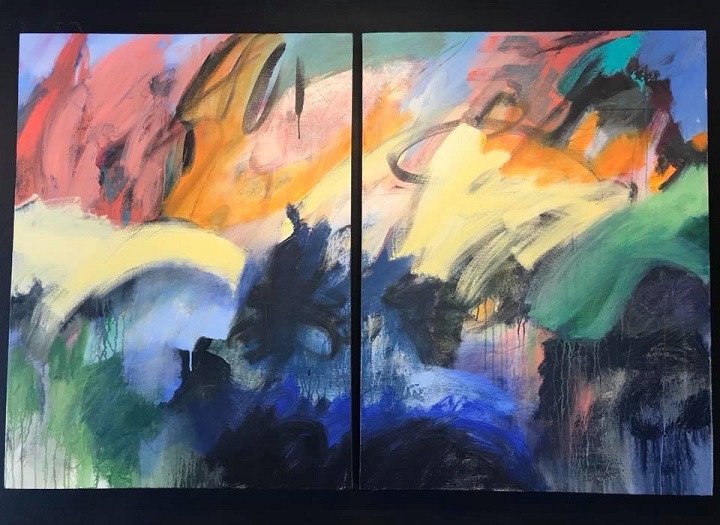 To introduce the new year, the SALT Island Provision’s energetic new owners, Maria Sharpe and Laura Richardson, have a compelling range of compelling paintings by an often-exhibited and once-full-time Key West resident. Massachusetts-born and -educated Jill Caldwell now spends springs and summers in Rockport, Maine, which explain her dramatic shift in colors, from Key West aqueous to her much more northerly-tinted recent work, curated by Ms. Richardson.

On her preferred square canvases, in a wide range of sizes (and thus prices) she wields a variety of mixed media—crayon, pastels, magic markers, graphite, charcoal—and acrylic on canvas. She layers and scrapes her work to achieve her strongly expressive, evocative, but subtle effects. She has continued to experiment to achieve her remarkably colored forms and textures.

One striking example, ”Blue Diptych,” rises from dark green up into lemon and gold, pink and sky-blue, with calligraphic slashes. Another outstanding example is her large active square, “Green 17,” with its two bulbous, connected but counterpoised organic bone-shaped yellow centerpieces, surrounded and partly covered by cerulean and impinged by small but significant orange and black, and set in a kind of undulating landscape of army green and rose, hints of crimson and bruise.

But by far the largest of her presentations, “Untitled,” is a huge spectacular square of bright yellows exploding from a black center which itself rests on periwinkle and black and reaches up into rich oranges and terra cottas. These spread sideways and farther up into evergreen, challenged and lured from above by clustered, circling black strokes. This is a commanding presence in the show.

Caldwell’s earlier Key-West-inflected work, by contrast, as shown here, suggest sea gardens and coral pillars of aquamarines and deep blues. “Immersion,” for example, in sea blues with touches of green and orange, has a trace of wave froth; this painting is already spoken for.

By contrast Caldwell’s even earlier paintings, most strikingly represented here by “Untitled,” are compelling abstract lines and angular shapes in sharper colors, many set off by white space and dark lines. These are from four or five years ago, when she seemed to be seeking more defined, but still passionate line and more distinct color fields. All of these in her gorgeous colors, of course.

Perhaps most intriguing (and affordable) is Caldwell’s set of thirteen small squares. These cover her range of styles, from that sharp-edged early work, through the sea-and-tropical Key West washes, to her most recent Maine-inflected dramas. All her work, like other artists’, is priced by size, and are selling. Speaking of size, be sure to ask for several of Caldwell’s tiny “business cards.” They are in fact sparklingly colorful snippets of the brilliant, rich colors of her paintings, and are handed out freely by the SALT gallery.

Overall, the positive impact of every piece, each strikingly unique, gives the whole lively Salt Provisions room a very palpable sense of purpose. They open up the charmingly artifact-filled space to Caldwell’s well-chosen inspiration.

The Caldwell show, at the corner of Fleming and Margaret, had its packed opening with the bright-faced Ms. Caldwell herself on January 5. It lasts throughout this month.