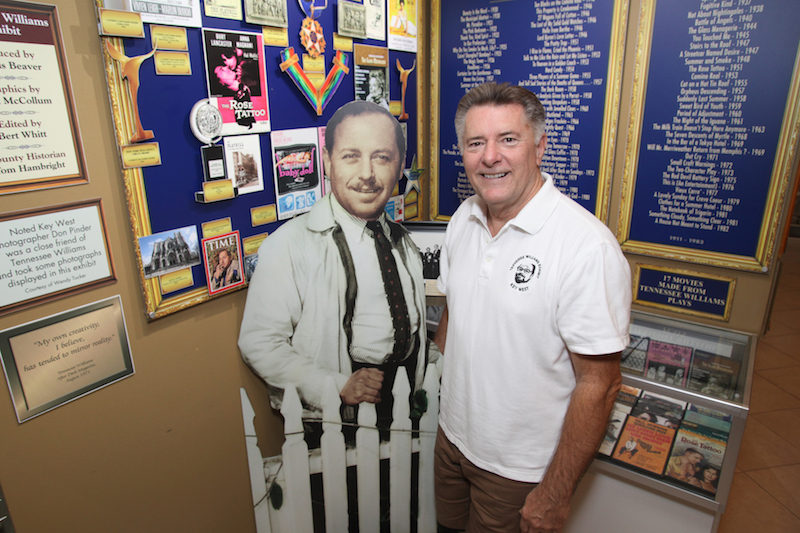 Dennis Beaver, right, founder and curator of the Tennessee Williams exhibit at the Tennessee Williams Museum, stands in front of the exhibit’s awards wall with a likeness of the literary icon. The British Guild of Travel Writers has nominated the museum, located at 513 Truman Avenue, for a “Best Wider World Tourism Project” award.

The Tennessee Williams Museum at 513 Truman Avenue, the most recent addition to the four museums stewarded by the Key West Art & Historical Society, has been nominated for an internationally noteworthy award by the British Guild of Travel Writers in its “Best Wider World Tourism Project” category. The museum “has been created with passion, enthusiasm and above all, a desire to honor a man whose contribution to his field was everything Hemingway made and then some,” said Julia Hammond, a London-based travel writer who put forth the award nomination following a visit to Key West in March.

Founded and curated by Dennis Beaver in honor of the Pulitzer-prize winning literary icon who became a Key West resident in 1949, the exhibit has become a destination for Tennessee Williams enthusiasts and scholars. The museum’s preserved and showcased collection of historic, archival materials help eternalize the importance of Williams’ legacy as one of America’s greatest 20th century playwrights and offers the largest collection of Tennessee Williams memorabilia and literary artifacts available to the public. A full roster of writing and painting contests, film forums and live theater performances are offered during the annual Tennessee Williams Birthday Celebration every March thanks, in part, to the support given by the Key West Art & Historical Society.

Museum displays include artist Jane Rohrschneider’s recently completed model of the playwright’s home at 1431 Duncan Street where he lived from 1949 until his death in 1983, first edition plays and books, images from the late local photographer Don Pinder, and original steps from the film adaptation of Williams’ play “The Rose Tattoo” which was shot entirely in Key West.

“Williams gave back to the community that welcomed him without judgement and this comes across in the fondness that shines through every exhibit in this tiny museum,” says Hammond. “This is an intimate tale told within an intimate venue.”

Hammond cited the museum’s value for money ($7 admission for adults) and the social impact it offers by championing a prominent member of the LBGTQ community, providing a poignant but not pushy “warts-and-all celebration of his life.”

The award winner will be announced at a gala held at the Savoy Hotel in London on November 4.

The Tennessee Williams Key West Exhibit on 513 Truman Avenue is open for self-guided tours 9:30am-4:30pm daily.  Curator tours are available upon request and with advance notice. For more information, contact Key West Art & Historical Society at 305-295-6616 or visit www.KWAHS.org.  Your Museums.  Your Community.  It Takes an Island.