“I grabbed the fire extinguisher and rushed to the forward cabin,” said Ted. “In less than a minute the floor was so hot the paint started to blister. I was barefoot and I couldn’t even go back. Austin was trying to save the cat and the birds. We had five birds. But there was no time.”

Ted and Austin managed to escape the flames, taking refuge on the bow deck. “Thank God the Coast Guard was there!” said Austin.

The Key West Fire Department and the U.S. Coast Guard spent most of the day trying to put out the fire. The fire would seem under control and the next minute it would flare back up again, engulfing the boat.

At one point the anchor line melted and the blazing boat was set adrift in the middle of the crowded anchorage. One sailboat rushing to get out of the way became tangled in the mooring line of a trawler.

Marine salvors threw a grappling hook with chain onto the bow of the “Solomon Sea” to take her in tow but soon the chain became too hot and melted the tow line. The boat was adrift again. The “Solomon Sea” collided with a sailboat and salvors decided to push the vessel aground.

By noon the fire was nearly contained, but the foam insolation was still burning inside the walls. “It’s going to keep burning until we get inside and stop it for good,” said one fire fighter.

Six hours later, with the incoming tide, the boat freed itself from the mud bank and started drifting in the strong winds, still smoldering.

Two U.S. Coast Guard vessels took the “Solomon Sea” in tow and reanchored her outside the harbor. The fire continued smoldering throughout the night.

The fire hoses had filled the bilge with water and the “Solomon Sea” was listing heavily to port. The fire department had forbidden the owner and salvors to board and dewater the boat, before it was cleared by the fire inspector. She sunk in the rough seas before day break.

The vessel had been a fixture in Key West harbor. It belonged to Ted Bautista, a friend to anybody and everybody on the water. The locals found a nickname for Ted’s three-story yacht. They called it the “Tedtanic.” A Key West boat with a ruckus of tropical birds cackling on the top deck by day and lit up like a Christmas tree by night.

Ted is known for helping many people in need of a place to stay in Key West. “I don’t even know how I feel,” he said “I cannot believe how fast we’ve found ourselves homeless. Everything we owned was in that boat.”

Ted and Austin sent out the livestream ‘thank you’ (below) to the U.S. Coast Guard and others on Sunday morning: 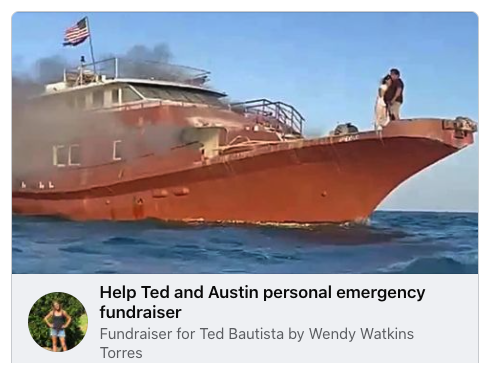