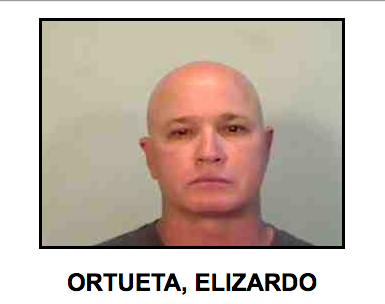 A Corrections deputy assigned to the Stock Island detention center was arrested yesterday charged with making a deal with an inmate: cash in exchange for helping him to escape. He was also charged with providing the inmate with contraband in the jail.

50 year old Elizardo Ortueta was reportedly acquainted with the inmate he allegedly made a deal with, 35 year old Albert Vizcaino Gonzalez, prior to his employment with the Sheriff’s Office; Vizcaino is in jail, convicted on drug trafficking charges. He faces a lengthy prison sentence.

According to Vizcaino, Ortueta has on several occasions provided him with fitness related items and substances, including “D-Bal”, a suspected steroid; creatine supplements and a measuring tape, none of which are allowed in the detention center. All of those items were recovered in a search of Vizcaino’s jail cell.

Vizcaino told investigators from the Sheriff’s Office Special Investigations Unit Ortueta approached him and first asked to borrow $50,000 in exchange for continued preferential treatment at the jail. Ortueta reportedly told Vizcaino he was in debt with credit cards and also needed a new roof on his house. Then, at a later date, Ortueta allegedly approached Vizcaino with another offer. For $400,000 in cash he would help Vizcaino escape from custody on his way to prison.

Vizcaino and his attorney reported this offer to the Sheriff’s Office and investigators worked with Vizcaino to set up a controlled delivery of cash to Ortueta. The deal: $150,000 in cash in advance with the balance paid after Vizcaino’s release.

Thursday at 12:45 p.m., a confidential source met with Ortueta at the CVS Pharmacy parking lot on Big Pine Key. The source handed over cash and Ortueta was placed under arrest. He was charged with receiving unlawful compensation for official behavior, smuggling contraband into a corrections facility, use of a two way communications device to facilitate a felony and with not having a valid Florida driver’s license, although he does possess a valid North Carolina license.

Assisting with this investigation was the State Attorney’s Office, the Office of Statewide Prosecution and Homeland Security Investigations.