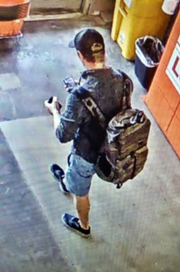 The Sheriff’s Office is asking for the public’s help in identifying the man seen in these photos who attempted to steal about $500 items from the Marathon Home Depot on Friday (Jan 4) before fleeing on foot. 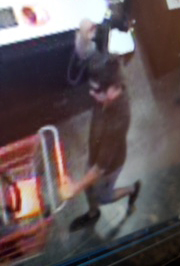 The camouflaged Dakine Cyclone II® dry backpack contained a Moen® faucet, a LED dimmer switch, a 58 volt lithium ion battery, a plastic welder, a Ryobi® pump, a battery charger and one 5-hour ENERGY® drink from the Home Depot, all of which totaled $478 and was returned to the store.

Anyone with information about this crime should contact Sgt. Christian Kellenberger the Sheriff’s Office Marathon substation at 305-289-2430. Callers who wish to remain anonymous can call Crime Stoppers at 1-866-471-8477. Tipsters can remain anonymous and if a tip leads to an arrest in the case, the caller may be eligible for a cash reward. Tips may also be submitted online at www.floridakeyscrimestoppers.com or via a text message using the smartphone app called P3 Phone. Tips can also be submitted via social media such as Facebook, Instagram or Twitter using the @CrimeStoppers305 hashtag.