Marine Deputy Wilfredo Guerra was on patrol at Fiesta Key Campground at the 70 mile marker when he spotted the two men in the water. He saw they both had spear guns and appeared to be spearing sea life. As he approached, he could see them dropping speared lobster. He asked them to get out of the water.

One of the men pulled the bag from under the seat. It contained 15 wrung spiny lobster tails.

Both men admitted to spearing and wringing the tails. 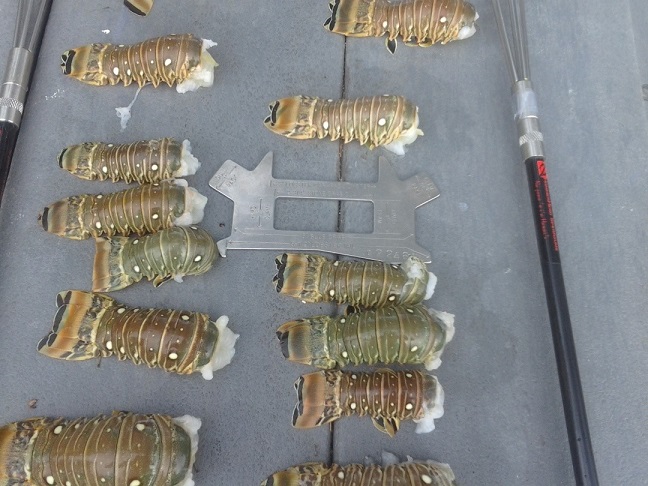 Two inmates at the Monroe County Detention Center have been charged with attempting to smuggle an illegal substance into the jail facility. A third man was charged for bringing the drugs to the jail.

On May 12th, an alert detention deputy found a plastic bag with suspected Spice inside of it. Spice is a synthetic drug which resembles marijuana. The bag had been dropped inside the secure fenced area surrounding the jail facility.

Detective David Fernandez was assigned to investigate. He intercepted conversations between two inmates residing in the detention center and several people outside the facility. The conversations revealed a plan to smuggle the spice into the jai – the same spice found inside the secure area on May 12th.

After discovering the origins of the plan to smuggle drugs into the facility, Detective Fernandez obtained warrants for the arrest of 29 year old Howard Schneider of Stock Island and 25 year old Timothy Thompkins of Key West. He also obtained a warrant for the arrest of 24 year old Trevon Albury of Key West, who is accused of providing the drugs that were to be smuggled onto the grounds of the jail.

There is an active warrant for the arrest of Trevon Albury. Schneider and Thompkins were both charged May 25th. All three face charges of use of a two way communications device to facilitate a felony and smuggling contraband into a detention facility.

The 56 year old victim, Dimitry Altschuller, and his wife were on board a commercial dive vessel out of the Amoray Dive Center Friday. Altschuller was on his second dive of the day when the incident occurred at about 11:48 a.m.

Altschuller was assisted on board where he was unconscious and not breathing. CPR was administered. A Fish and Wildlife Conservation Commission vessel arrived on the scene and the victim was transferred to that vessel, which took him to shore at Key Largo Homeowner’s Park, at the 99 mile marker of the highway.

Paramedics met the FWC vessel, along with Deputy Dave Campbell. Altschuller was taken to Mariner’s Hospital where he was pronounced dead.

A Miami man was arrested Friday after a traffic stop revealed a large amount of gasoline in illegal containers inside a boat being towed behind his vehicle.

Sgt. Joel Slough stopped 42 year old Julio Cesar Almedia-Valdez as he was southbound at Coco Plum Drive and Highway U.S. One at 8 p.m. Friday. The Miami man was driving a U-Haul truck, towing a trailer with a large Bayline cabin cruiser on it. The trailer had no tail lights or working brake lights.

Sgt. Slough was backed up on the traffic stop by an agent from U.S. Border Patrol.

Almedia-Valdez gave the officers permission to search the vessel. Inside, they found numerous containers of gasoline, 107 gallons in all. Two large drums of gasoline were not DOT approved containers.

Additionally, the boat trailer was in very poor condition, with tires that appeared to be dry rotted, making them unsafe to operate on the highway.

Almedia-Valdez admitted the fuel was his. He was arrested and charged with unlawful conveyance of fuel. He also received citations for having faulty trailer lights. A more thorough search after his arrest revealed four more five gallon containers of gasoline concealed underneath a bad in the main cabin of the vessel.

Almedia-Valdez was booked into jail.

A 34 year old Key Largo man told deputies he was stabbed sometime Saturday. He was transported in the early morning hours today to Mariner’s Hospital for treatment of a puncture wound in his lower back.

Deputy Ignacio Molina responded to the Murray Nelson Government Center shortly after midnight where he met with the victim. The victim told him he was drinking with a friend named “Tom” Saturday on board the friend’s boat, offshore. He said another man he does not know was also there.

He said Tom and this unknown male began to argue and he stepped between them to calm things down. He said he felt something hit him on the back.

He said some time later he felt pain on his side and Tom told him he had an injury and needed to go to the hospital immediately. He said Tom gave him a small paddle boat to go to shore, where he met with Deputy Molina.

The victim was unable to provide a name for his attacker, and only knows his friend by the first name “Tom”. Detectives will be investigating.

A man from Houston, Texas man was taken to jail Wednesday night after being stopped for speeding twice in a very short time period.

Deputy Orlando Alvarez was at the 104 mile marker when he spotted a white Chevrolet Corvette southbound traveling at 81 miles per hour in a 45 mile per hour zone just before 11 p.m. He pulled the car over in a nearby parking lot. The driver was identified as Steven Kubas. Kubas was argumentative during the stop, denying that he was speeding. He was written a speeding citation and told the deputy he would see him in court.

Kubas, obviously agitated, sped out of the parking lot, running a stop sign and cutting off an oncoming motorcycle.

Deputy Alvarez followed, and saw the Corvette increasing its speed. He measured the vehicle’s speed at 115 miles per hour in a 45 mile per hour zone. The deputy radioed ahead for other deputies to watch for the vehicle. He then turned on his emergency lights in an attempt to stop it.

Kubas pulled over at the 102 mile marker. Kubas told the deputy he was speeding because he was angry about getting a ticket. While Deputy Alvarez, the driver of the motorcycle Kubas cut off stopped. He expressed his concern for how dangerous Kubas had been driving and said he had to take evasive actions on his motorcycle to avoid a crash.

Kubas was arrested and charged with reckless driving. In the car, deputies found a small amount of marijuana and drug paraphernalia. They also found a 9mm handgun. The Corvette was towed from the scene and Kubas was taken to jail.