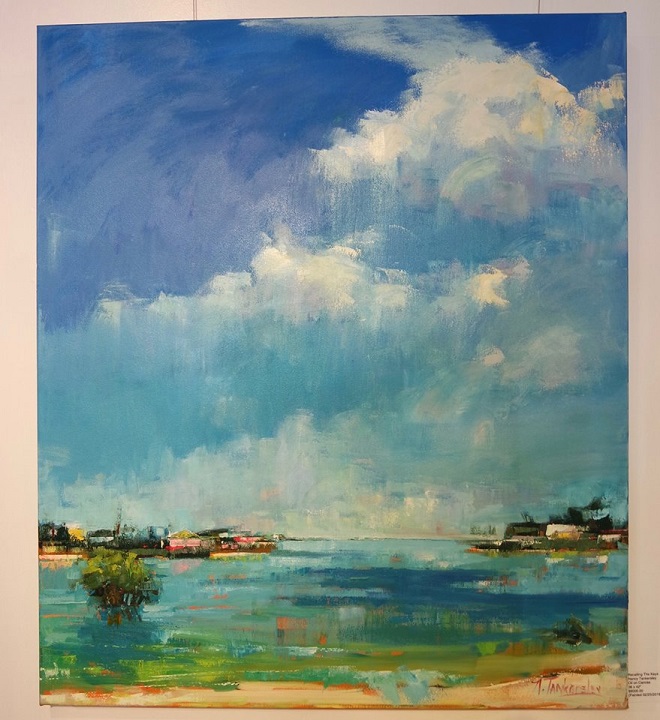 Another fine show at the Gildea Gallery, 552 Southard, opened on February 26, with the two featured artists in attendance, and the show will continue during March. Its focus is on Nancy Tankersley’s wide selection of sensitive portraiture and figurative paintings, in strong, contrasting colors, and on The Studios of Key West artist-in-residence Jean Pederson’s striking range of coloring and approach. Interestingly, both have been much influenced, they say, by their introduction to Key West’s light and its rich panoply of color.

Tankersley, a portrait painter to start with, is now especially drawn to small, casual scenes of people on the beach, on the street, out to drink, in their houses. A whole series of these relaxed, conversational genre pieces line one wall of the gallery.

Pederson too has shifted from the portraits she is best known for, of which two dark examples are hung in the Gallery, to a wide variety of mixed-media abstract shapes and styles. These are all in a variety of rich combinations and intriguing lines and shapes of indigo, blue, aquamarine, bright or camouflage green, yellow, cream, orange, red, black. The three largest mixed-media paintings, “Sun-Kissed,” “Ocean View” and “Sea Grapes,” are especially compelling, as inviting as Key West’s flora always are. Two other smaller ones by Pederson are “photo-manipulated” designs of strong texture and color. On March 10, Ms. Pederson’s studio at the residences at 607 Ashe Street will be open from 11 to 3, as part of the TSKW Studio Tours (tickets: 305-296-0458).

Also at the Gildea this month are three very tall, spectacular gold-spattered oil paintings by Doborah Barr, two of them with evanescent little girls apparently in 1890s costume, staring over their shoulders or up into the golden rain, and one of them flanked by an enormous hazy, dangling fish.

And Peggy McGivern is showing her large calm yet slightly eerie “Sand Between Her Toes,” with its three stages of life and relationship to the ocean–beside, entering, engulfed.

Seven of Suzanne Donazetti’s popular woven and painted copper strips are still at the Gallery. Robert Baras has several pieces from his previous exhibition at the Gallery, in a variety of interesting styles and strong colors. Three of Sally Wernicoff’s “Voices in Stone,” these all in colorful marble, are distributed throughout the gallery. And of course Todd Andrew Babb’s energetic, athletic figures on their wires are still climbing the walls of the Gallery, the gallery customers’ favorite.