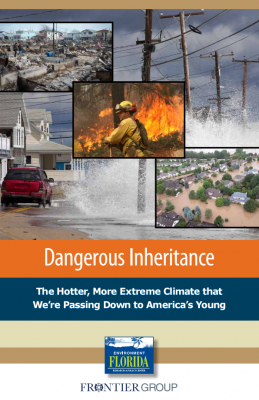 Report examines changes in climate over the last 40 years. On the heels of a fresh round of climate-related votes in the US Senate, and findings by scientists determining that the first two months of the year comprised the warmest such period on record, a new Environment America Research & Policy Center report examines changes in temperature, storm intensity, and sea level through the eyes of five different generations of Americans, from Baby Boomers to Millennials to Generation Z.

As a result of global warming, young Americans today are growing up in a different climate than their parents and grandparents experienced. It is warmer than it used to be. Storms pack more of a punch. Rising seas increasingly flood low-lying land. Large wildfires have grown bigger, more frequent and more expensive to control. People are noticing changes in their own backyards, no matter where they live.

Pollution from burning coal, oil and gas is the primary cause of global warming. Without urgent action to reduce global warming pollution, children born today will grow up in a more dangerous world.

We can protect our children from the most harmful impacts of global warming by reducing carbon pollution and shifting to cleaner sources of energy. The United States has a critical window of opportunity to lead the world in this effort. 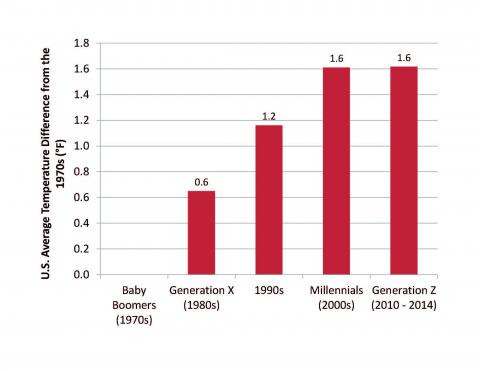 Figure ES-1: Each Generation Has Grown Up in a Successively Warmer Climate
Click to Enlarge

It is warmer than it used to be. 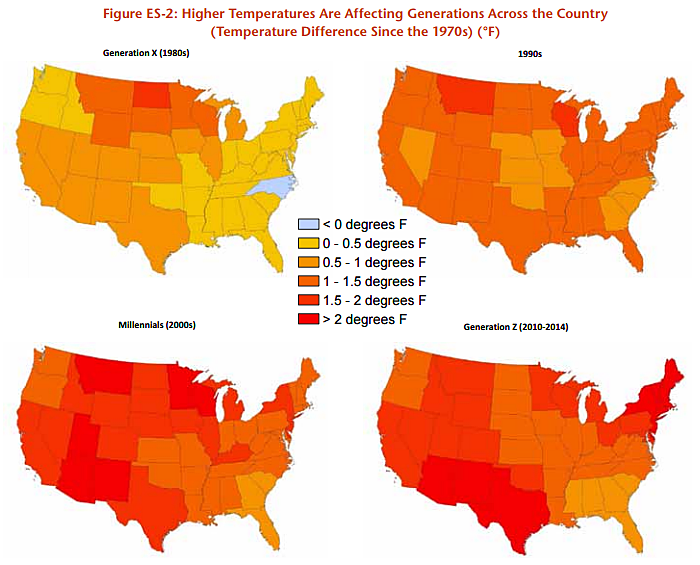 Figure ES-2: Higher Temperatures Are Affecting Generations Across the Country (Temperature Difference Since the 1970s) (°F) Click to Enlarge

The biggest storms are getting bigger. 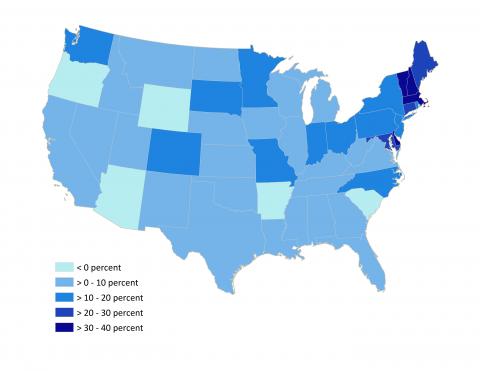 Figure ES-3: The Biggest Storms are Getting Bigger (Percent Increase in Maximum Annual 24-hour Precipitation Totals by State, 1970 to 2011) Click to Enlarge

Sea level is rising as global warming heats up the oceans and melts glaciers and ice caps.

Warming threatens our health and safety and puts our children at risk.

To protect our children from the worst impacts of global warming, the United States must cut its overall emissions of global warming pollution by at least 80 percent below 2005 levels by 2050, as part of global action to dramatically reduce carbon emissions. This will require action at all levels of government. In particular:

* Based on a linear regression trend analysis of the largest annual 24-hour precipitation total from 1970 to 2011 at 3,700 weather stations across the contiguous United States. See the Methodology section for details.