Deep Air Is Funnier Than a Screen Door in a Submarine!

You Can Instantly Own Reef Perkins’
New Book for only $3.99 “There’s nothing funny about hit men, insurance scammers, loansharking bookmakers or leaky love dolls, but Perkins allows us to see the outlandishness of it all,” writes former Key West journalist Mark Howell. “He makes us smile and laugh with his plots and the insane characters that parade through the pages of Deep Air .A blow-up sex doll, gems and beer are catalysts for this wacky misadventure through the backwaters of Key West, what’s not funny about that? Perkins answer is everything’s comical. One begins to wonder if Perkins made these characters up, or did he once know them. He certainly captures their personalities and traits like only an old friend could.If you enjoy Carl Hiaasen’s books, you’re going to love Perkins’ rendition of life in the Florida Keys.”

Reading a tale written by Perkins is much like experiencing his storytelling in person. The language and story lines are fast-paced, improbable and wickedly entertaining – with a vaguely psychedelic feel. His style has been compared to that of Kurt Vonnegut. In Deep Air, Perkins describes a sailing vessel secured to a dock. “She had not been to sea in twenty years and tugged at her lines like a flat-chested transvestite in a pirate bodice.” Note: Perkins’ books are not in the P.C. section of the bookstore. Until just a few years ago, Perkins never perceived himself as a writer. “I never wrote as a child and never thought about being a writer; I didn’t have anything to say,” said the man whose ancestor George Soule came over on the Mayflower and was a signer on the Mayflower Compact in 1620. “Until fairly recently, I was in the gathering mode,” he said.

Perkins “gathering mode” included growing up in an unconventional family in which everyone “was addicted to some form of exotic behavior.” Following high school he spent time hitchhiking around the country, “bumming in the Bahamas,” leading trail rides on a dude ranch and serving in the military, eventually leading a special warfare team in Vietnam. His “gathered” uncommon life adventures led, in due time, to his first book, Sex, Salvage and Secrets, a memoir, originally intended to be a one-volume legacy for his son, locally-based filmmaker Quincy Perkins.

Deep Air is billed as a work of fiction, but in a place like Key West and a mind like Perkins’, fiction’s roots do not draw entirely from pools of imagination. “Key West is a target-rich environment for writers,” said Perkins. “I took a true story from my salvage days and with the help of a fruitful imagination concocted this Keys tale, best served with a cold drink, an umbrella and a beach chair.” 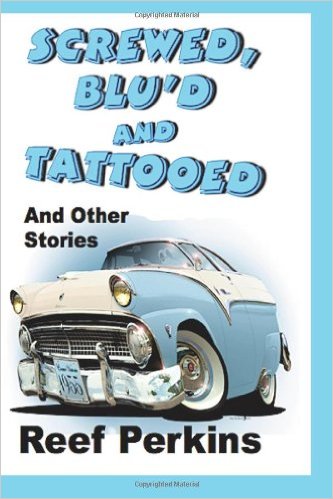