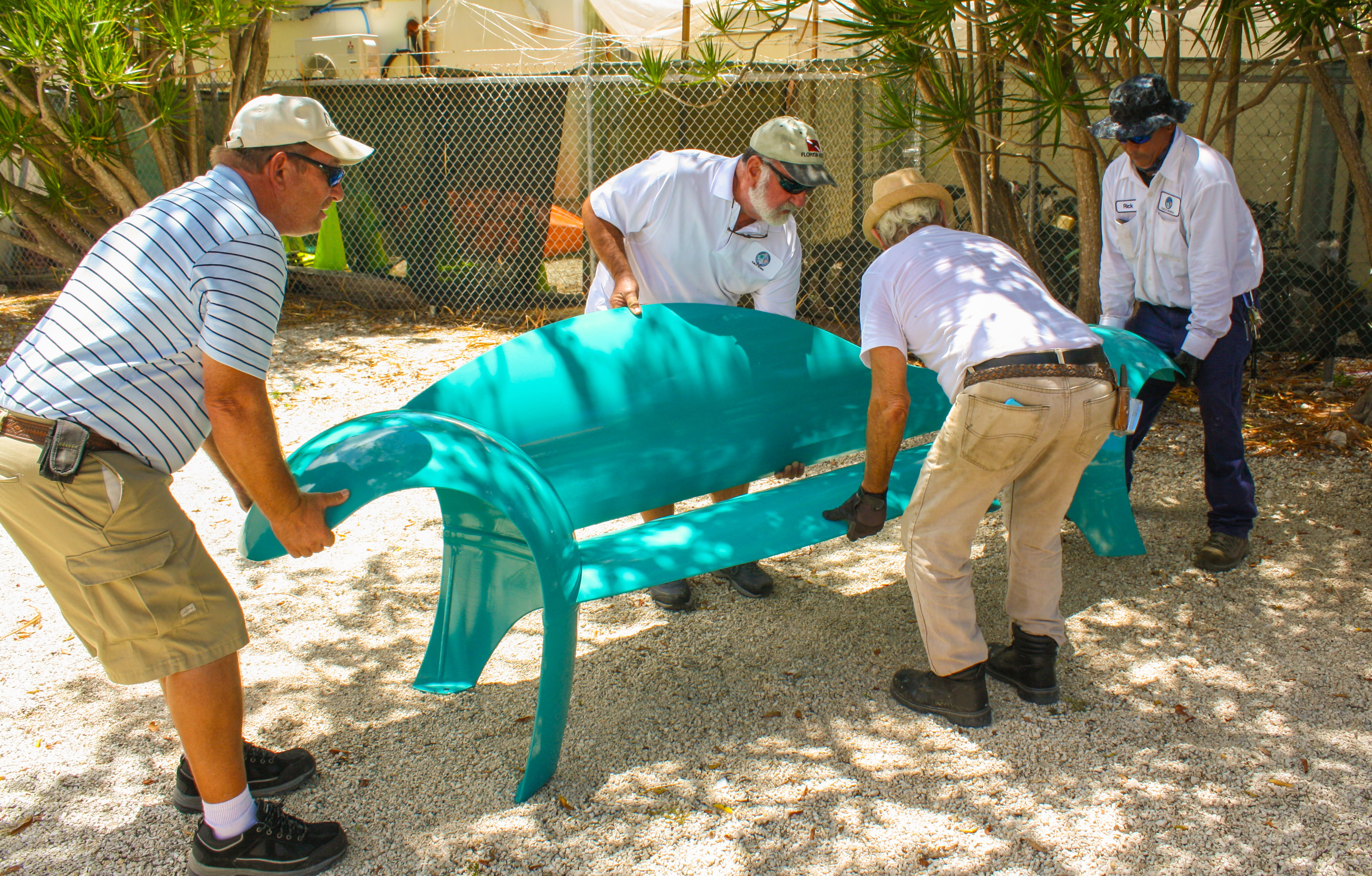 The Monroe County Marathon Courthouse is a little more colorful with the recent installation of an eye-catching turquoise bench and sky blue loveseat created by California artist Colin Selig. He makes them from an unlikely source: salvage propane tanks once used to heat homes.

His functional sculptures are part of the County’s 1% Art in Public Places program.

“These benches create a lovely, quiet space for people who visit and work at the Courthouse,” said Elizabeth Young, Executive Director of the Florida Keys Council of the Arts, who administers the public art program on behalf of the Commissioners. “They fit perfectly for the vision of a contemplative courtyard where those waiting for jury duty or perhaps a stressful trial would have a welcoming spot to sit and talk.”

The program began in the early 1930’s when artists involved with the Works Progress Administration, part of President Roosevelt’s New Deal Program, were sent to Key West to revitalize the economy with their artwork that promoted the destination. The program has been growing ever since. In 2001, the Monroe County Board of County Commissioners passed an ordinance that requires 1 percent of all County construction projects costing at least $500,000 and renovations exceeding $100,000 (with the exception of sewage treatment plants) “to be set aside for the acquisition, commission, installation and maintenance of works of art in said buildings.”

The County’s program has more than 130 artists pre-qualified to propose work when projects become available. For this Courthouse project, the Art in Public Places Committee received eight proposals within budget. The committee recommended Colin’s proposal and the BOCC approved it. The committee chose the cool ocean and blue sky tones.

“We were thrilled by Selig’s technique of upcycling materials that are 100% maintenance free and permanent – an essential component for public art,” Susann D’Antonio, Chair of the Art in Public Places Committee.

Selig describes his work as a synthesis of sculpture and sustainable design. He said his work is influenced by American sculptor Alexander Calder, known as the originator of the mobile (moving sculpture), and Antoni Gaudi, a Spanish architect whose free-flowing works were greatly influenced by nature.

“I like how they explored curves and shapes and forms,” Selig said.

Selig begins with locally sourced tanks, which are an abundant and sustainable material due to strict regulations limiting their service life. Next, he carefully dissects the tanks and reassemble the pieces, while doing no additional reshaping of the metal.  This “upcycling” process uses less energy than recycling because the source material is reused in its current form.

“Reused is superior to recycled,” Selig said. “It leaves a much smaller footprint.”

It takes Selig about 25 to 30 hours to fabricate a bench. Once done, he sends them to a subcontractor for powder coating.

Selig, whose art is installed in public locations across the United States, was provided with a $14,200 budget. (This 1 percent came primarily from the renovation of the courthouse).

The benches arrived in crates. Local artist Robert D’Antonio, known as “Bobby D,” was hired by Selig to oversee the uncrating and installation of the 500-pound benches. He was helped by County employees and inmates at the County detention center.

“Sit on the benches,” Selig said. “Everybody says they are surprisingly comfortable.” 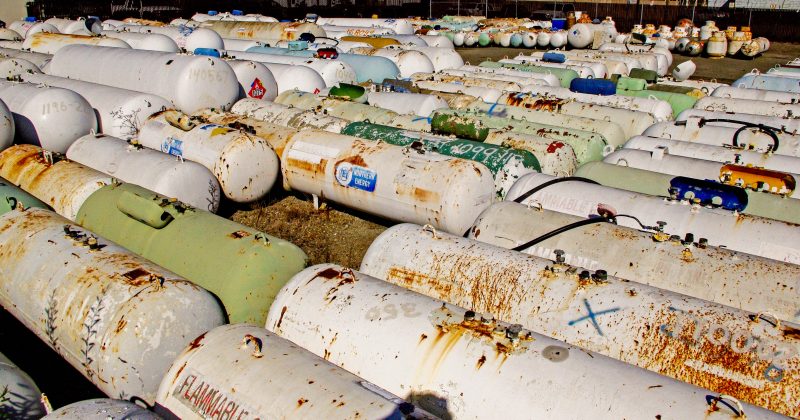 Photo Courtesy of Colin Selig: California artist Colin Selig creates benches out of salvage propane tanks used for heating homes. Two of them are now at the Monroe County Marathon Courthouse as an Art in Public Place project. For Editorial Use Only. 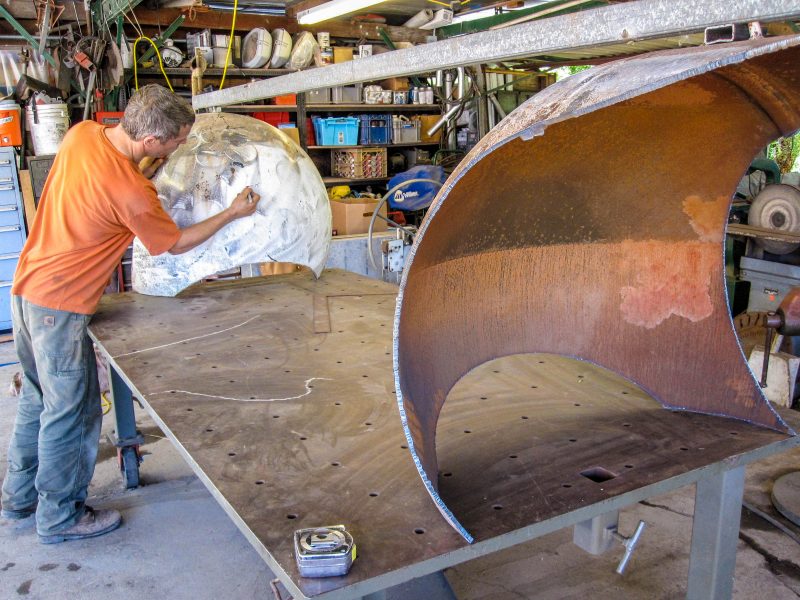 Photo Courtesy of Colin Selig: Artist Colin Selig works on a bench that he creates from salvage propane tanks at his workshop in California. For Editorial Use Only. 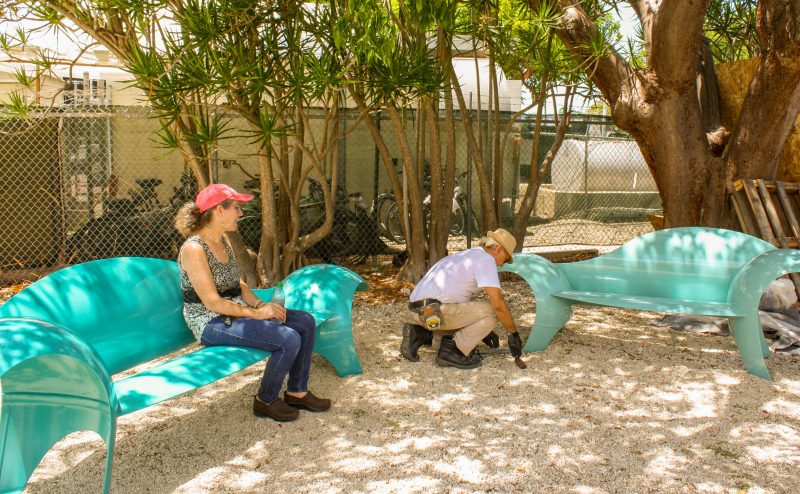 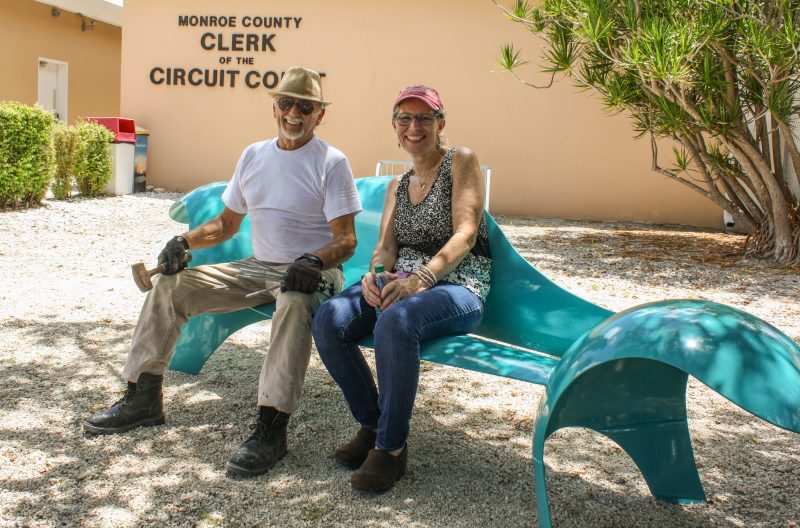 Photo D by Savannah Koval/Monroe County Public Information: Local artist Robert D’Antonio and Elizabeth Young, Executive Director of the Florida Keys Council of the Arts, try out the new bench installed at the Monroe County Marathon Courthouse — an Art in Public Places project. For Editorial Use Only.