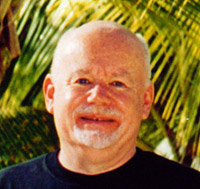 Randolph “Randy” Becker, minister to ONE ISLAND FAMILY and involved community activist, has filed as a candidate for Mayor of Key West.

Randy Becker, a resident in Bahama Village for the past nine years, has served Key West as one of the original appointees on the Bahama Village Redevelopment Advisory Committee and now is a member of the Truman Waterfront Advisory Board.

“I am running at this time,” Becker said, “because if we want to have the future we desire as a city we need to begin now to shape that future, not just compensate for the problems and neglect of the past.”

In other areas of community service, he is a member of the Board of the Florida Keys Outreach Coalition for the Homeless and President of the Interfaith Ministerial Alliance. For five years he served on the Truancy Team at Key West High School as a community representative and was a Board member of the Neighborhood Accountability Board (an effective court diversion program for first-time youth offenders). He has also been active with Equality Florida and community witness in time of social crisis.

An internationally recognized and honored writer and speaker, he highlights that and other experience as qualifications for Mayor:

“The Mayor of our city has three important roles: to be an articulate representative of Key West to the world, to chair the meetings of the City Commission with skill and fairness, and to help build a consensus among the Commissioners and citizens around our vision for the future.”

Having led or advised assemblies from 7 to 700, Randy Becker is knowledgeable and experienced in parliamentary procedure central to the conduct of meetings.

The bulk of Randy Becker’s professional work has focused on helping communities of diversity work together to find common ground and shared vision. As he often says, “We can all make it if we focus on connections, not on differences.”

A native of Utica, New York, he holds a degree in Physics and Sociology from Brandeis University, a Doctor of Ministry degree from Meadville/Lombard Theological School at the University of Chicago, and a post-doctoral PhD work at New York University.

Since 1970, he has worked as a professional Minister to a variety of congregations and regional religious organizations. He has served on appointed government and civic boards in four other states, including as Vice Chair of a major regional commuter transportation agency in Massachusetts.

“My experience has all been in the area of non-profits and government agencies which exist without an infinite supply of funds. I approach public service with a belief that we do not need more funding, but rather more vision. In my time in Key West, over and over again, I have seen leadership scrambling to get on top of situations that have been neglected or ignored until they have become emergencies. It is time for us to move past being reactive and start being proactive and creative.”

Over the course of the months between the announcement of his candidacy and the election on August 30, 2016, Randy Becker will be releasing a series of position papers.

“I think it is important for voters to know and understand my views on a number of the central issues in our city. Some of the topics I will cover are: Environmental Responsibility, Economic Development, Homelessness, Affordable and Workforce Housing, Helping Our Seniors, Diversity, and Governance.”

In summing up key points of his campaign, Randy says, “As much as I revere the past, I trust the dawning future more. I believe that the best days for our island community are ahead.

“I am running for Mayor of Key West because I want to provide leadership that will call on the best in each person in Key West.

“I am running now because I do not believe we have an extra two years to wait to begin creating our future.”

The “Randy Becker for Mayor” campaign welcomes the participation of all in Key West who share his vision and want to shape the future. More about the candidate, and his campaign and ways to be involved are on the website, www.RandyBeckerforMayor.com, or Facebook at https://www.facebook.com/BeckerforMayor

“It all starts with my vision of the role of Mayor, which is based on the central values of Justice, Equity, and Compassion, coupled with the principles of Respect and Transparency: Every person treated equally and fairly, every decision made thoughtfully on the basis of facts and its benefit to city as a whole, all issues considered and resolved in an open and respectful way.”

Randy Becker is married to Elissa Bishop-Becker, a Licensed Professional Counselor who specializes in grief and loss, and the author of “Loss and Growth: The Grief Spiral.” They are the proud parents of four daughters and have three grandchildren.

Beyond work and community service, Randy enjoys music, cooking, and railroading (which is hard when the nearest railroad is in Cuba!). Most mornings you can find him engaged in a 5 mile walk that takes in all of downtown and the adjacent waterfront areas.

One thought on “RANDY BECKER ANNOUNCES RUN FOR MAYOR”