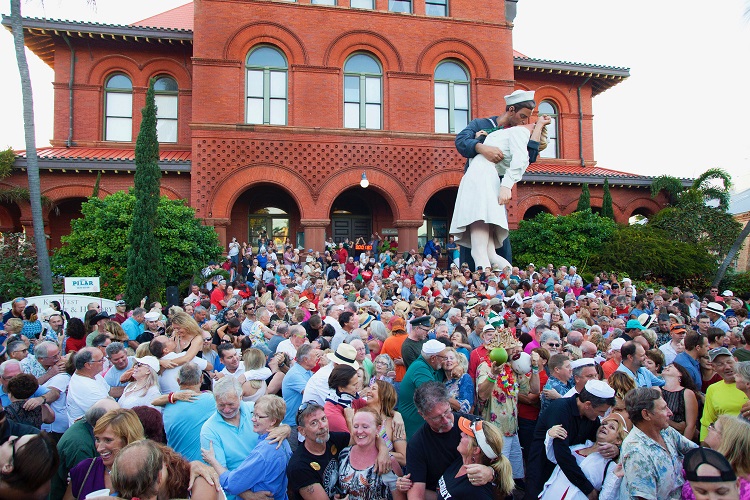 Hundreds of lovers flowed from the Custom House Museum veranda and down into the street at last year’s Key West Art & Historical Society Valentine’s Day Kiss-In. The public is invited to pucker up and do it again this Valentine’s Day, Wednesday, February 14. Festivities begin at 5:00pm with the flash-mob Kiss-In photo op taking place promptly at 6:00pm.

The goal is to fill the street in front of the Museum with a crowd of couples emulating Johnson’s sculpture which was inspired by an iconic photo of a sailor and nurse celebrating the end of World War II in Times Square, New York, with a kiss now considered the most famous in American history.

Kiss-In participants are encouraged to arrive at 5:00pm and enjoy a complimentary Pilar rum punch and live disco/funk/soul music performed by 3sum before the lip-locking that’s to happen at exactly 6pm. Last year, more than 250 couples puckered up for the staged kiss photo op that was reported by news outlets across the country and around the world, including a coconut wielding man kissing a “Cast Away” inspired “Wilson” volleyball and a woman puckering up with a toy dolphin.

“In a time when there seems to be so much anger and separation, let’s show the world that Key West embraces peace,” said Society Operations Manager Shawn Cowles. “This “Kiss-In” pose will only be for a brief second but will share an important message to the world.”