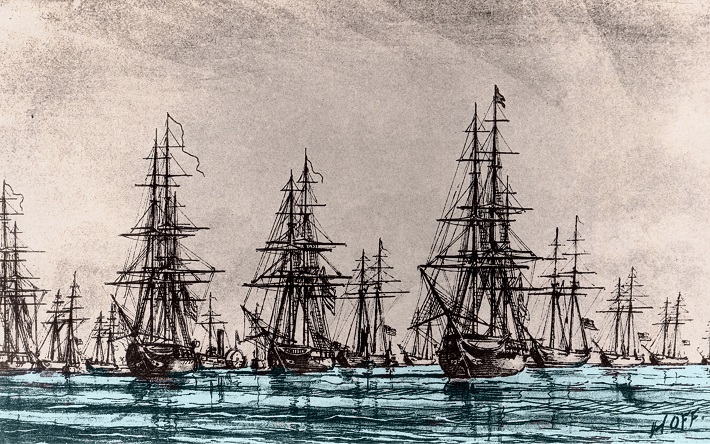 Passengers aboard the beautifully restored 79’ wooden sailing schooner Hindu, which launches from Key West Bight Marina, can enjoy mimosas or non-alcoholic beverages and salt spray as Convertito shares the historic back-story and personal insights on the day’s topic, “Porter and the Pirates.”

A member of the fledgling United States Navy, Commodore David Porter (February 1, 1780-March 3, 1843) gained notoriety during the Quasi-War with France, and experienced success during the War of 1812. During the early 1800s, the Navy ordered a fleet to the West Indies to put an end to rampant piracy and protect the merchant shipping network in the area. Porter’s proficient leadership skills and earlier successes prompted the Navy to place him in command of its anti-piracy squadron based in Key West. Under his governance, particularly his insistence on fleet size, tactical skills and navigation know-how, the Navy triumphed, purging the region of pirates.

“Our remarkable island proved the best place in all of the United States to tackle piracy,” says Convertito. “With Porter’s leadership and direction, piracy was nearly stamped out in one of the world’s busiest shipping channels. Our local history is relevant, and Porter is probably one of the finest examples of how the Florida Keys have a global impact in maritime history.”

The next scheduled tour on the 93-year-old vessel, “Coastal Fortifications in the Florida Keys,” will be presented by Kelly Clark, NPS, on Saturday, March 31. Tickets are $50 for Society members, $60 for non-members. Space is limited to 30 passengers, so early registration is urged. Sponsored in part by the Helmerich Trust and the Florida Department of State. For tickets and more information, visit kwahs.org/education/historic-harbor-tours or call Society Director of Education Adele Williams at 305.295.6616 x 115. Your museums.  Your community.  It takes an island.