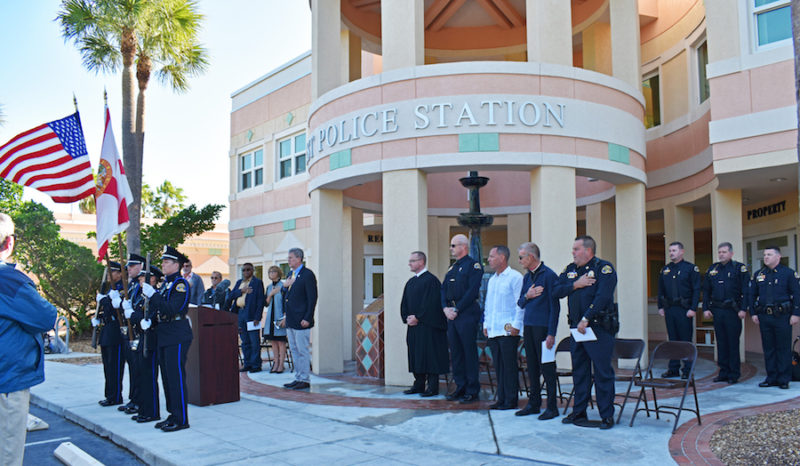 Over 200 members of the community, family, friends, and law enforcement colleagues turned out Thursday to witness the swearing in of Key West Police Chief Sean Brandenburg. The honorable Judge Mark Wilson administered the oath of office.

Chief Brandenburg acknowledged retired Chief Donie Lee, noting that he left a strong department in the wake of his ten years as chief. “He has left me with a huge responsibility and legacy to maintain,” said Brandenburg.

Chief Brandenburg has been a law enforcement officer since 1990, serving his first 12 years in Indiana and joining the Key West Police Department in 2002.

Capt. Randy Smith has served with the Department since 2005. He was promoted to sergeant in 2014 and to the rank of lieutenant in August of this year. He is the son of a retired Coral Springs Police Department sergeant. In his time with the Key West Police, he has served as a special operations detective, the team leader of the Dive Team, and, like his father, an internal affairs inspector.

Lt. Haley came to the Department in 2004 after working as an investigator for the Florida Department of Children and Families. Prior to that, he served in the U.S. Coast Guard. He has worked as an officer and, like his father who is retired from FDLE, as a detective. He was promoted to sergeant in 2016 and has served most recently as detective sergeant.

Sgt. Joe Stockton was born and raised in Key West and came to the Key West Police Department in August of 2009. For much of his career, he has served as a motorcycle officer and a traffic homicide investigator. He has most recently supervised the Department’s Motor Unit.