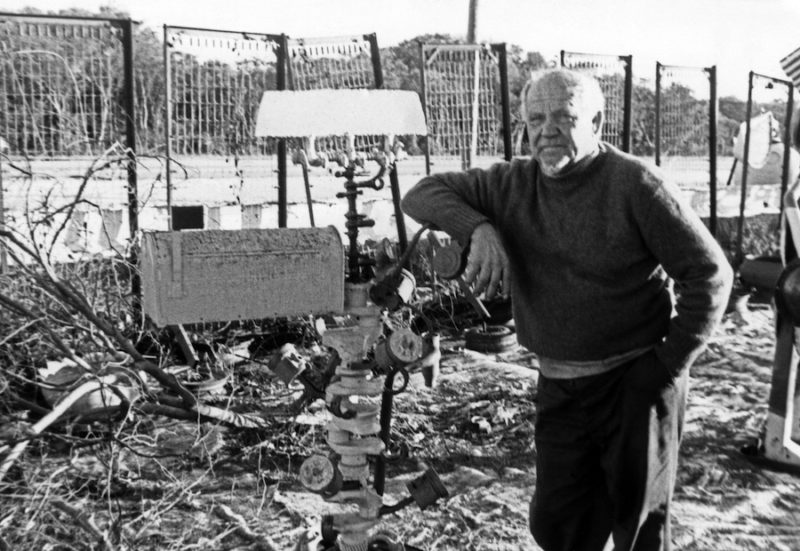 The Fourth Annual Papio Kinetic Sculpture and Art Bike Parade— a family-friendly, art-inspired, human-powered, mobile sculpture and art-bike parade that celebrates creativity and innovation—is set to roll on Saturday, May 4, bookended by complimentary special events on Friday, May 3 and Sunday, May 5. While many are gearing up their kinetic creations, others might be wondering, just who exactly is Papio? And why a parade named after him?

“Barefoot” Stanley Papio was a man whose ingenuity and spirit sparked our islands more than thirty years ago with his with a clever sense of satire, tenacity, and innovation, creating recycled metal sculptures that gained him attention and respect as one of the Florida Keys’ pioneering folk artists.  He arrived in Key Largo in 1949, when the upper Keys were little more than an isolated stretch of Highway U.S. 1, and lived there contentedly for many years using his welding skills acquired in the U.S. Army during World War II for both commercial and creative purposes. Over time, his yard, piled high with old cars, washing machines, and other metal appliances surrounded by a welded bed spring fence, became a treasure trove of recyclable materials that he would transform into art. 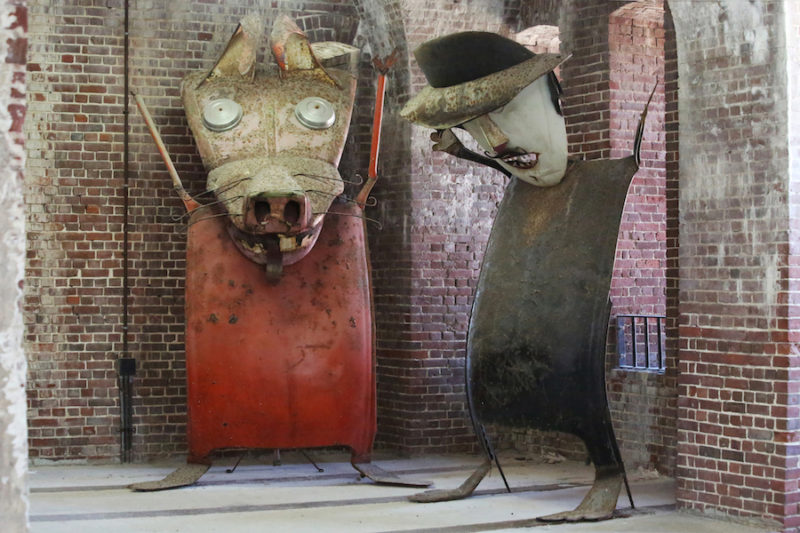 The Rabbit” (left) and “The Preacher” (right) are among the Stanley Papio sculpture collection pieces on exhibit at Fort East Martello. (Photo contributed.)

Unfortunately, as the area developed and the space between he and his neighbors diminished, what he saw as potential art, others simply called junk.

“I don’t have a junkyard,” Papio once said. “That’s all my future works out there, but you can’t tell that to people with nothing in their heads.  Even when I’m done with something, they think it’s just garbage because it’s made out of junk.”

Despite disagreeable neighbors and the mounting pressure they imposed (which included his being jailed six  times for zoning violations), his innovative and rebellious spirit continued to evolve; Papio went on to create “satirical metal sculptures that depicted his neighbors, naysayers, and people he considered to be ‘environmental rapists,’” says Key West Art & Historical Society Curator Cori Convertito.

“He transformed his collected metal into extraordinary pieces of art, many that tell a story of the defilement of the natural beauty of the Florida Keys,” says Convertito.

True to his irreverent nature, Papio renamed his welding shop “Stanley’s Art Museum” and charged a quarter for admission, inadvertently creating a roadside exhibition of folk art for travelers as well as a repository for his often comical and caustic creations. Critics, collectors and museum owners eventually discovered this outsider artist, all recognizing his creativity, imagination, and remarkable welding skills.  Later, he exhibited his work in Canada and his work toured Europe as part of the U.S. State Department’s America Now exhibition. He is listed in the Directory of American Folk Art and The World Encyclopedia of Naive Art.

Papio’s vision to have a traveling exhibition ended abruptly when he died suddenly of a heart attack at the age of 67 in 1982. But his work, which was donated by his family shortly after his death to the Key West Art & Historical Society, is now housed at Fort East Martello Museum, where more than 100 of his restored sculptural objects and other three-dimensional constructions are on revolving display in a climate controlled gallery. While he may never had the chance to have his own traveling exhibition, the spirit of his vision lives on in The Society’s Papio Kinetic Sculpture Parade, which features community-made kinetic sculpture float teams and art bikes created with his rebellious ingenuity, recyclability, and humor in mind.

Channel your inner Papio and sign up to make your own kinetic sculpture float or art bike today, and add to the zany fun sure to be had on parade day, May 4th.

For registration information and guidelines and a full event schedule, visit papiokineticparade.com.   Presented by Key West Art & Historical Society and co-produced by Wonderdog Studios, the Papio Kinetic Sculpture Parade is supported in part by the State of Florida Division of Cultural Affairs, The Helmerich Trust, and the Monroe County Tourist Development Council.