This year’s Fantasy Fest theme in Key West is “Time Travel Unravels.” The FF website defines the TTU theme as “Past…future…present let your mind wander! This year’s Fantasy Fest theme…takes your imagination to anywhere in the space-time continuum (STC)…. You can set your [costume] time machine to go where your whim and imagination takes you.” In other words, do whatever the frack you want. It’s nice to see this all-encompassing sentiment, even if it does come wrapped in a blatantly hyped-up sales pitch to fill our hotels and restaurants and bars and other touriented venues during the festival’s ten days. Pinterest even has a page featuring get-up ideas in the TTU vein (mostly steampunk, it seems, with an occasional Red Riding Hood or Viking tribal warrior princess outfit thrown in for spice). 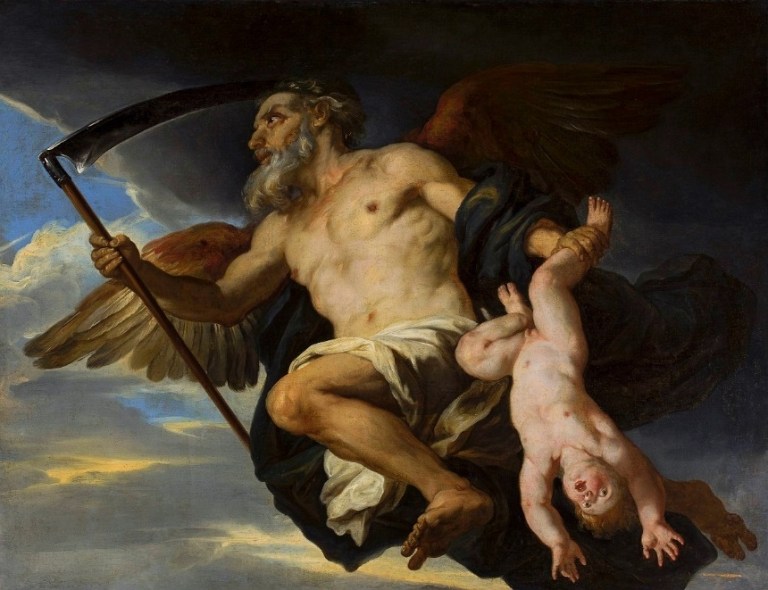 If at first you don’t succeed…

The phrase “time travel unravels” might also be used to describe a temporal anomaly (TA), better known as a disruption in the STC, which would certainly fit with FF traditions. (Oddly enough, and going tangestray here, TA is also the name of a tall bearded iris, one with butterscotch standards and grape burgundy falls.) Science-fiction stories make use of TAs quite often. Witness the archetypal Ray Bradbury tale “The Sound of Thunder,” where the accidental crushing of a butterfly in the Late Cretaceous period by a chrono-adventurer completely changes the future to which the hunting party returns. (This ignores the multiverse concept, of course.) In Doctor Who, the Bureau of Temporal Anomalies existed to prevent or undo just these kinds of disaster, as did the Star Trek Department of Temporal Investigations.

What sparked this discussion, if you can call it that, was Chapter 8 in James Gleick’s book Time Travel. (Yes, I’m back to that again.) Titled “Eternity,” it begins by asking this question: “What if there were no such thing as time?” Later in the chapter he offers an answer of sorts:

Consciousness requires time, it seems. It requires being in time. When we think, we seem to think consecutively [he’s speaking for himself, obviously—in my case, not!], one thought leading to another, in timely fashion, forming memories all the while.

He then writes of Isaac Asimov’s novel End of Eternity, where technicians living “outside of time”

…try to plot out the infinite possibilities of all the might-have-beens and pick out a might-have-been that is better than what is and decide where in Time we can make a tiny little change to twist the is to the might be and we have a new is and look for a new might-be, forever, and forever.

Nice work if you can get it, I guess, and one of the great temptations that underlies the attraction of time travel. Of course, if one of us could do this, probably many or all of us could do it and then what? You’d get a chrono version of whack-a-mole where people are constantly popping up in the centuries before and after to change the future, preserve the future, or take advantage of knowing what’s going to happen before it does. That means the present would begin to look like getting trapped inside an HGWellian kaleidoscope or time wearing A Scanner Darkly scramble suit, every physical aspect around us changing constantly. It would be maddening, if not fatal. It’s no wonder Asimov’s technicians stay outside of time. They can meddle with and observe, meddle with and observe what amounts to a promethean-sized Skinner Box.

As End of Eternity closes, a visitor from the far-far-far future tells a technician that he and those like him are “a bunch of psychopaths.” Their “incessant petty tinkering” has ruined everything, has robbed humans of marvelous achievements like interstellar space travel. Her mission is a meddle to end all the meddling and thus “the rewriters of history are written out.” She may have a point about the psychopatweaking. Still, looking around at what’s going on in the world today, one can almost wish for someone outside time to lend a helping hand. Having a “new is” and a “new might-be” seems to be just what we need right now.

4 Responses to “Out of Time”