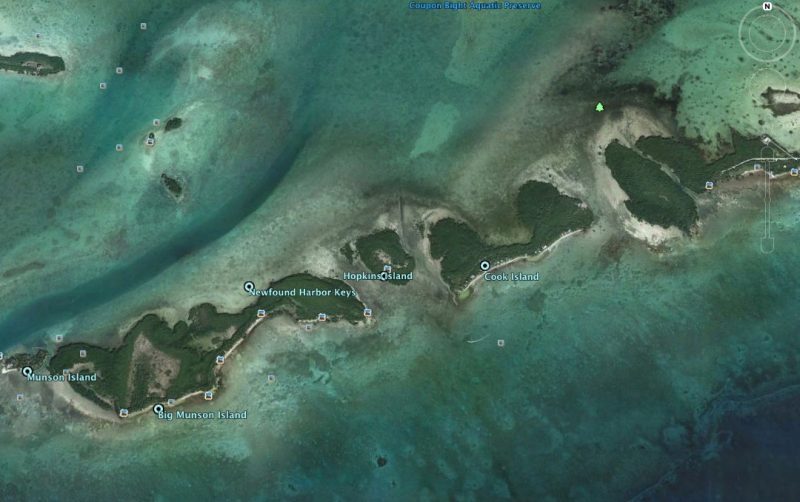 Remember, the first time you drove down US 1 all the way to Key West? We would like to take you from that glittering vision of hundreds of little green islands suspended over endless turquoise waters and sit you down in the boardroom of the County Commissioners who are in charge of protecting that whole magical expanse called the Florida Keys.

Few issues in Monroe County have stirred as much passion and cloak and dagger plots as the development of those offshore islands.

According to a 2015 report by biologist Curtis Kruer there are over 1,900 acres of privately owned offshore islands in unincorporated Monroe County. But while a 7,500 sf build-able lot on Key West’s Sunset Key sells for almost 4 million dollars, a similarly sized piece of land with no building permit allocation on nearby Wisteria Island would be almost worthless.

This week, Barton Smith, attorney for the would-be developers of Wisteria Island went, once again, before the County Commission.

“If he likes it, I don’t.” exclaimed Commissioner Sylvia Murphy, who became suspicious after Smith said he supported her intention to leave the current protections for offshore islands undisturbed. “I know how devious he can be. Therefore, if he likes it, I don’t,” said Murphy.

Last year, Smith was fighting a Comp Plan amendment that would have guaranteed a solid prohibition of the transfer of density and building rights to offshore islands. He came before the Commissioners pretending to represent the revered owner of Ballast Key, then 96-year-old David Wolkowsky. Smith won that battle; the decision was stalled. But later that week in a video interview with The Blue Paper, Mr. Wolkowsky said he had not hired Smith to represent him. Apparently, Smith’s undisclosed principal was in fact the controversial Roger Bernstein of Wisteria Island.

So, past the smoke and mirrors, what really happened this week to the development potential for offshore island owners?

It’s actually quite simple. In theory offshore islands can support only one house per ten acres. But as the public realized when Roger Bernstein tried to develop Wisteria Island, there are 101 tricks to getting around that density restriction.

Mr. Bernstein, for example, claimed his island was not really an “offshore island” because it was a manmade spoil island. Like many Florida Keys owners, he also claimed his property should not be “Tier I” because the vegetation was “disturbed” or full of “invasive” instead of “native” vegetation.

His team of lawyers and experts also pointed out that it was only fair that Wisteria should be zoned high density “mixed-use commercial” since his neighbors on Sunset Key had been allowed to develop a high-density resort. He negotiated his very own special “sub-area policy” that would have turned a density of two houses into a resort with 35 luxury homes, 85 hotel rooms, a restaurant and a marina.

At the time, it was quite obvious that Commissioners Rice and Carruthers were supportive of Bernstein’s plans for Wisteria Island and Commissioner Neugent seemed to be leaning that way. [The development failed only after The Blue Paper discovered that in 1924 U.S. President Calvin Coolidge had reserved Wisteria Island for use by the Navy pitting Bernstein against the U.S. government in a battle over ownership that remains unsettled to this day.]

There is no guarantee that Mr. Spottswood, another local multi-millionaire developer, who owns the Coupon Keys, or Pritam Singh, who owns a large portion of Cook’s Island, couldn’t successfully push similar arguments through with approval by those same Commissioners. If successful, they could drastically increase the building density of their islands.

The risk of opening the development floodgates for offshore islands appears to have been grossly underreported by county staff. Tavernier Key, for instance, appears on the county’s spreadsheet as having zero upland area yet the island is currently advertised for sale with 17 acres of upland.

Most offshore islands are designated Tier I and as such cannot become receiver sites for the transfer of development rights [more density] or building rights [ROGOS’s]. But, if the forest burns on Tavernier Key will it qualify for a change in Tier? Bernstein let Wisteria Island burn for 3 days. “Whatever habitat they had there last week they have a lot less now,” chuckled Commissioner Rice at the time.

Sunset Key’s forest burned twice, completely. Not even its rookery of federally endangered Roseate terns could stop the Key West government from signing the development agreement with Pritam Singh.

In 2007, in Key West, allegations of corruption over development of Wisteria Island angered residents to such an extent that voters, through a sweeping referendum, stripped the City Commission of its power to annex the island.

And this is where the idea of prohibiting the transfer of building rights to offshore islands comes in. The County doesn’t have enough building allocations [ROGO’s] to fill all the allowable density in the Keys. In order to swiftly push their project forward developers must purchase development rights from other property owners and transfer them to their island.

The proposed Comprehensive Plan amendments supported this week by Florida Keys Environmental Fund, Audubon, and Last Stand would have prohibited transfers of development rights to offshore islands regardless of particular land use designations.

According to the planning director offshore island owners can apply to change their zoning district, their FLUM, and/or their Tier [from Tier I to Tier III or III-A] which, if successful, would open them up to the possibility of transferring development rights to their island.

“I don’t see any difference,” said Commissioner Kolhage during the meeting, “property owners can apply for Tier and zoning changes but can’t anyone come in and apply to change the language we put in the Comp Plan as well? How is it different?”

According to Julie Dick, the attorney who represented the Florida Keys Environmental Fund and Last Stand, the difference is absolute.

Decisions about changing zoning districts, FLUM designations, or Tier designations are taken on a case by case basis with the County Commissioners sitting in a “quasi-judicial” capacity. Like a Judge, they apply the law to the facts and of course those decisions are appealable to the courts. An unsatisfied developer can appeal to a Circuit Judge for a different Tier designation denied to him by the Commission and if unsuccessful there, he may continue on to the appeal court.

The Comprehensive Plan, however, is a legislative document adopted by the BOCC sitting as the County’s legislative body and the law is generally not appealable once officially adopted [unless it frustrates some fundamental constitutional right.] All judges will be bound by a law that says offshore islands cannot be receiver sites for the transfer of ROGO’s or development rights regardless of an offshore island owner’s ability to obtain a more desirable zoning or Tier designation. [Of course, an owner could attempt a constitutional challenge or try to amend the Comp Plan, as Commissioner Kolhage stated, but the amendment cannot be inconsistent with the rest of the Plan’s policies and the Commission is under no obligation to oblige.]

After an awkward discussion about the “devious” Mr. Smith, Mayor Carruthers resumed by summarizing the majority’s position: “It’s simple. Any action that we take today introduces new criteria. Then that’s the criteria that is blocking development as opposed to criteria that’s been on our books for decades.” [Any new language in the Comp Plan could potentially reset the clock for takings claims.]

Attorney Julie Dick argued that simply setting up a general policy prohibiting developers from transferring development rights and ROGOs to an offshore island wouldn’t reasonably equate to a takings claim because each property owner would still be able to build to their zoned density [one house for every 10 acres if OS – Offshore Island zoning] by competing for new ROGO allocations like any other property owner.

In the end, only Commissioners Murphy and Neugent supported the inclusion of the language expressly prohibiting transfers to offshore islands.

Roger Bernstein lost his federal appeal before the 11th Circuit nearly four months ago and the time to request review by the U.S. Supreme Court has now expired. A development on Wisteria Island is not going to happen anytime soon. But any private offshore island owner who follows the same path, applying to change their Tier designation and negotiating a special “sub-area policy” has a shot at developing their island by transferring development rights and ROGO’s and the BOCC members will not be able to point to a solid policy to keep that from happening.

It was a sad day for the Keys.