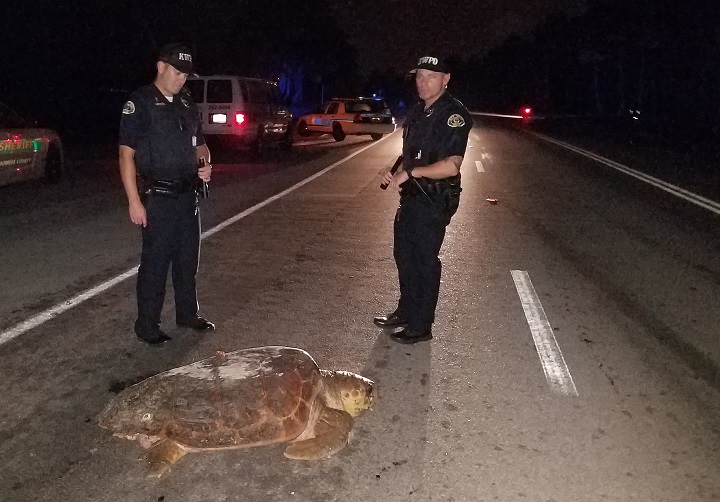 Key West Police officers are often called upon to rescue dogs and sometimes kittens, but this week they had a call that could only happen while protecting paradise.

Around 5 a.m. Wednesday, a concerned citizen reported seeing a loggerhead turtle laying her eggs on the Bridle Path across the street from Smather’s Beach. When officers arrived, they found the gigantic animal attempting to cross the four-lane South Roosevelt Blvd. and return to the ocean. They immediately set up a perimeter – blocking traffic to ensure the turtle safe passage.

“We were well aware of the dire circumstances the turtle was in,” said Officer Carter Sims, who was the first to arrive on scene, “having crossed the road once to make a nest in inhospitable terrain.”

The officers protected the turtle as she worked her way back to the beach and along about 40 feet of shoreline where a raft of sea grass blocked her reentry to the water. Distressed, she turned back to the road, crossed the four lanes of black top and returned to the Bridle Path.

While two of the officers protected the turtle from oncoming traffic, others located the nest full of eggs. They surrounded the site with crime tape and contacted the Key West Sea Turtle Club rescue group for help.

In the meantime, the exhausted turtle again turned to the beach and began to cross the boulevard.

Before her traverse was complete, the group of turtle rescue volunteers arrived, providing the officers with enough manpower and expertise to return the turtle back to the water.

In the hours that ensued, the volunteers were able to relocate the nest to ensure that the hatchlings won’t be at risk when they make that first dangerous run to the sea.

The incident is a good reminder that this is turtle nesting season and there are things Keys residents can do to make it safer for them. Turn off outdoor lighting at night and shade your windows if you live near a beach. Key West’s beaches are closed to the public each night at 11 p.m., and this time of year it’s vital that people heed the law. Finally, watch out for adults and hatchlings in the roadway; civilization can easily disorient turtles and the results – unlike this week’s positive outcome – can be tragic.