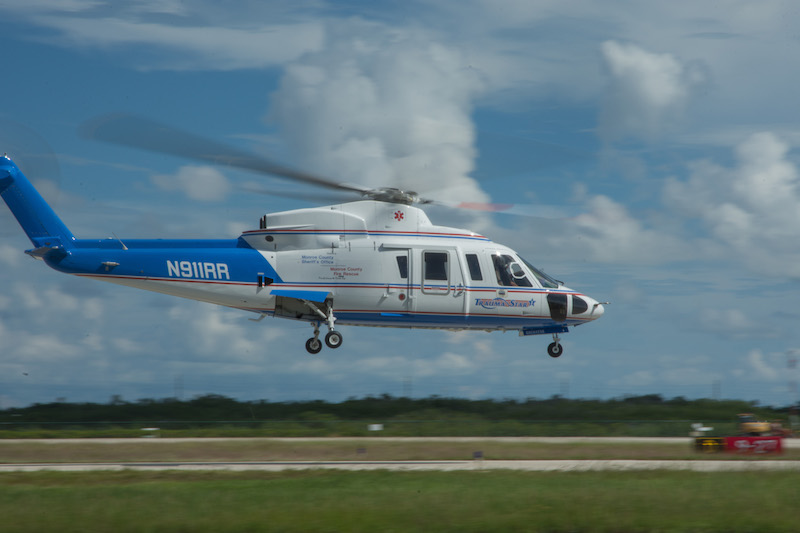 “Fire Rescue and the Sheriff’s Office have been working together for more than a month to get through the FAA inspections and make sure the helicopter is up and ready to fly,” Callahan said. “Our flight crews and medical personnel are all trained and we are excited about the new air ambulance. We look forward to continuing to provide life-saving service to the citizens and visitors of the Florida Keys.”

In June, the Monroe County Board of County Commissioners voted to spend $2.5 million from its sale tax infrastructure fund to purchase the helicopter, which previously was flown by the Arkansas Children’s Hospital’s Angel One air ambulance program.

The 2002 Sikorsky is similar to the Trauma Star program’s 1981 helicopter that has served Monroe County for nearly a decade. This included flying a record-high 471 patients during Fiscal Year 2016. Both air ambulances can transport two patients, but the newer model is equipped with more modern avionics and can fly faster. The newer helicopter also has better lift capabilities that are needed on high humidity days, especially for flying out of hospital helipads that are surrounded by buildings and mangroves.

Trauma Star, a joint operation of Monroe County Fire Rescue and the Sheriff’s Office, is a County service that does not collect any out-of-pocket costs from residents. For Fiscal Year 2016, Trauma Star revenues collected from insurance companies and out-of-county patients were $200,000 more than the cost of operations.

Since operations began in 2006, Trauma Star has flown more than 2,400 people from the Florida Keys to trauma centers and hospitals on the mainland.

The County will keep the 1981 Sikorsky – which is still operational but has become increasingly expensive to maintain – as a backup to be used when the 2002 Sikorsky is out of service for maintenance.

Monroe County Administrator Roman Gastesi said the County continues to monitor the situation with the privately owned LifeNet air ambulance service, which is based at the Lower Keys Medical Center. County residents have been charged thousands of dollars in out-of-pocket costs for transport on LifeNet.

If you are a resident and did not receive a sticker, you can call 305-289-6010 or pick them up at any fire station in the Keys, at Monroe County Fire Rescue Headquarters at 490 63rd Street Ocean in Marathon or at any of the Monroe County Sheriff’s Office sub-stations.

For information about the fee-waiver program and requirements for residents, go to Monroe County’s website at www.monroecounty-fl.gov, click on the Resident tab, and then click on the Trauma Star link.