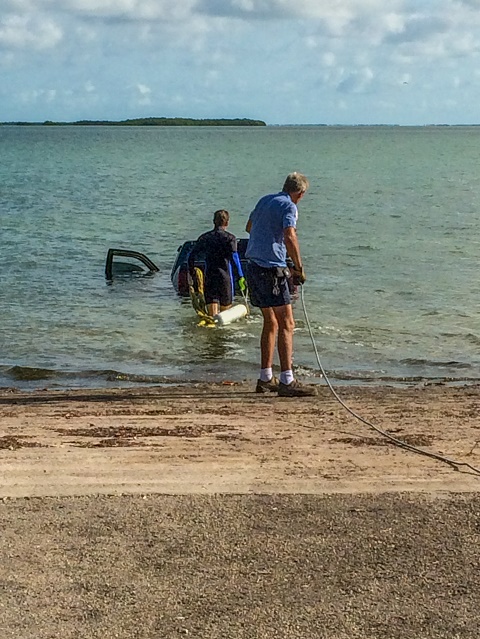 Each work morning, Monroe County’s supervisor of solid waste and recycling Mike Basham drives along Blimp Road on Cudjoe Key to check for dumped items that need to be collected. At about 7:50 Thursday morning, where the road ends at the boat ramp, he noticed an unusual site: a submerged truck about 100 feet offshore.

“At first it looked like a giant board or a big piece of lumber,” Basham said. “But as I got closer, it kept getting bigger and bigger. Then, I saw what looked like a cab of a truck. I realized there was a pickup in the water.”

Basham called the Monroe County Sheriff’s Office. The dispatcher asked him if anyone was inside the vehicle. Basham said he did not know, but would check. He walked to the edge of the water and inside the truck he saw a head, which was not moving. He yelled to see if the person was alive. A woman replied: “Help me. Get me out of here.”

Basham did. He took off his shirt and his boots, and then waded through chest-deep water to the Chevrolet Canyon to help her to land. The woman, in her mid-30s and from Orlando, came to the Keys to visit friends. She told him she did not know the road ended and drove into the water at 11 p.m. She was not injured and Basham said she surprisingly was not suffering from hypothermia.

When Basham asked the woman why she had stayed in the truck all that time, despite waters rising to her chin during high tide, she said. “It was pitch black out and I don’t swim. She also was worried about snakes and sharks.”