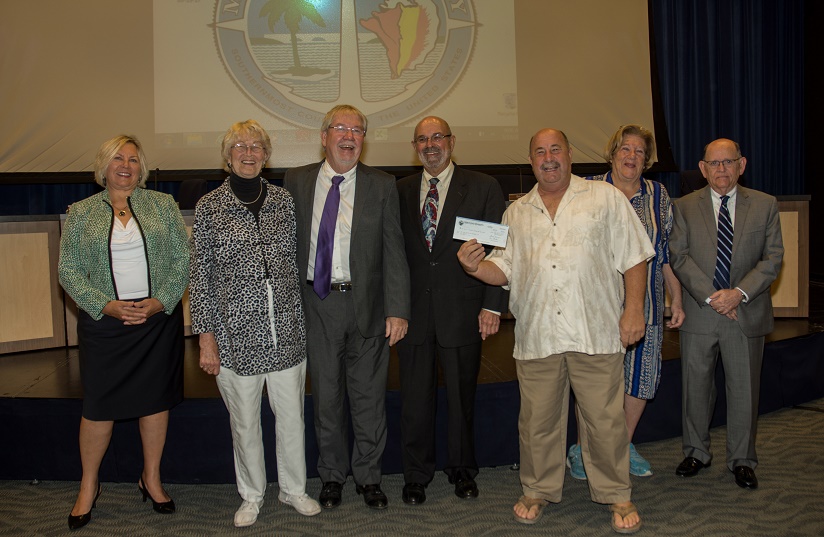 KEY LARGO, FL – At the Monroe County Board of County Commissioners meeting Wednesday, Mayor George Neugent presented the Key Largo Wastewater Treatment District with a $1 million check, the second installment in a 10-year Interlocal Agreement regarding the distribution of $17 million in Mayfield Grant Funds for wastewater projects in the Keys.

Monroe County and the Key Largo Wastewater Treatment District entered into the Interlocal Agreement on May 20, 2015, to make the most efficient possible use of the Mayfield Grant Funds for the benefit of all residents of Monroe County, including those who reside within the Key Largo service area. The agreement will save taxpayers a combined $6.5 million in interest costs over the next decade.

Here’s how it works: Monroe County accepted KLWTD’s $17 million portion of the second $50 million allocation of the $200 million Mayfield Grant Fund – which by law the KLWTD cannot use to repay debt for its already built system. Monroe County is using the funds to pay for current construction on the Cudjoe Regional Wastewater System.

In return, Monroe County will repay that $17 million to KLWTD at no interest over the next 10 years. This will allow KLWTD to receive its entitled share of the Mayfield Grant Fund, as well as repay its wastewater construction debt more quickly and thus save money on interest. Monroe County also will save money by using the grant funding to pay for construction at Cudjoe instead of borrowing and incurring interest charges.

Here’s the background of the Mayfield Grant Fund: In 2008, the State Legislature authorized the issuance of up to $200 million of Everglades restoration bonds, to be used as the “Mayfield Grant Funds,” to help defray the cost of mandated but unfunded sewer projects in the Florida Keys.

In March 2012, the State Legislature appropriated and the Governor approved the first of four $50 million yearly allocations of the anticipated Mayfield Grant Funds. This funding was distributed to Cudjoe Regional Wastewater System ($30 million) and Islamorada ($20 million).

In 2014, the State Legislature appropriated and the Governor approved the second $50 million yearly allocation of the Mayfield Grant. The money this time was allocated as follows: $17 million each to Key Largo and Marathon, $7 million to Islamorada, $5 million to Monroe County/Florida Keys Aqueduct Authority, $3 million to Key West and $1 million to Key Colony Beach. The money is distributed when the entities provide paid invoices for qualifying construction.

The Mayfield Grant, which is administered by the Florida Department of Environmental Protection, allows participating entities located within Monroe County to reassign grant interests among themselves.