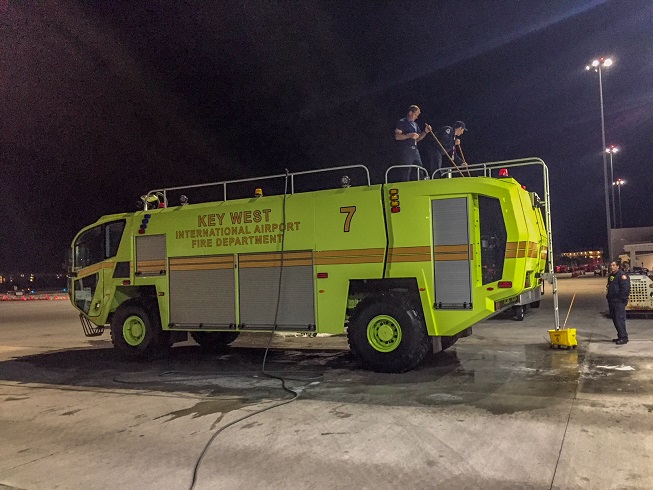 The new fire truck can hold 1,500 gallons of water and 500 pounds of dry chemical. It is specifically designed to fight aircraft blazes that need dry chemicals to put out metal and petroleum fires. The new truck also meets current Federal Aviation Administration and National Fire Protection Association standards for a crash truck to protect an airport the size of Key West International Airport, said Monroe County Fire Rescue Battalion Chief Cab Bentley, who is stationed at the airport.

The new truck was hauled on a tractor trailer from Appleton, Wisc.  A technician from Oshkosh will come to Key West to make sure everything is operational before putting the truck into service, which is expected to be Jan. 15, 2018. Oshkosh also will provide training on the new truck.

At its time trial, the truck went from 0 to 50 mph in 17 seconds and tops out at 79 mph. “This is fast for a truck that size,” Bentley said. “And it is important, because the FAA requires that a crash truck needs to be able to get anywhere on an airfield and have product flowing to put out a fire within three minutes of being dispatched. FAA studies show that a fire breaches a fuselage in three minutes.”

The truck also has two water cannons, one on the bumper and one on the roof. They each can pump 750 gallons of water per minute, and they can pump simultaneously.

When the new truck goes into service, the current primary crash truck, a 2007 Oshkosh Striker, will become the backup at Key West. The current backup, a 1996 Oshkosh T1500, will be relocated to the Florida Keys Marathon International Airport.