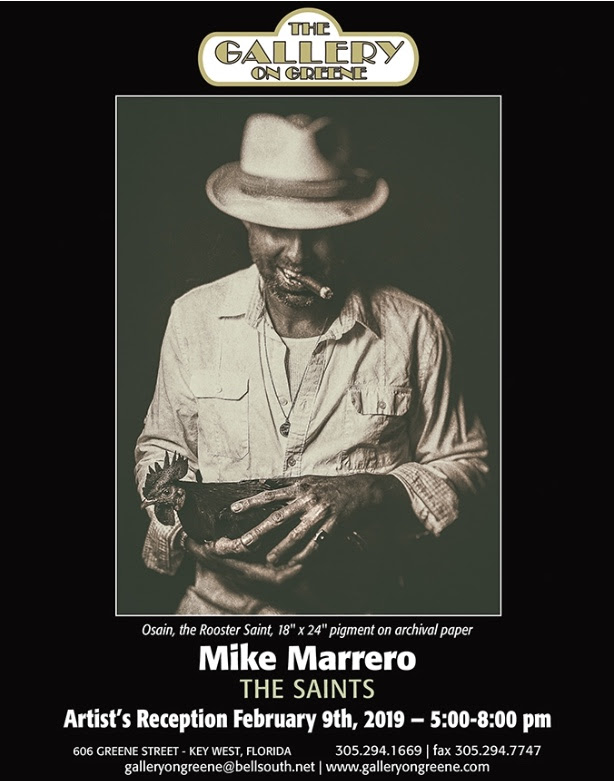 Mike Marrero grew up in Key West surrounded by La Regla de Ocha or Santeria and tales of The Saints.  These were not the Christian Saints you are most likely familiar with. They are the Yoruba Gods and Goddesses brought from West Africa.

These are The Saints that exact the knowledge that seven ears of corn placed in a brown paper bag and then burned in the sand could bring you good luck.

Mike learned about Chango (the owner of fire, lightening, thunder and war, also patron of music and dance) and Santa Barbara (syncretized with Chango)  and O’Batala, (Sky Father  and creator of all The Saints or Orishas).  They are an inseparable part of his heritage and the cultural fabric of this island.

His goal with this exhibit was to recreate The Saints, not as they are, but as he imagined them as a child.  How he saw them through the prism of his memories and his families beliefs.

Marrero trains his camera on his native island and draws inspiration from his childhood memories, capturing the pathos of ordinary life as it was then, with a sophistication that belies his generation.

As Marrero matures as a photographer, playwright, film maker and father his fast evaporating roots mean more to him than ever.