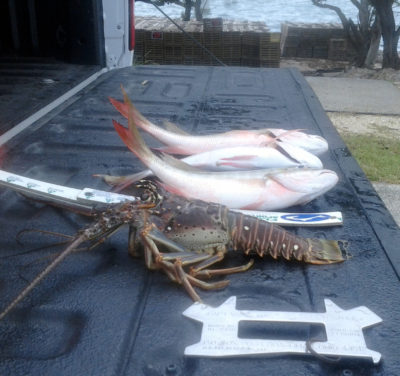 A 51-year-old Miami-Dade County man was cited on July 5 for possessing illegal snappers and lobster, about three weeks before lobster mini season gets underway.

Miguel Comesana was charged with possession of three undersized mutton snapper and one undersized, out-of-season lobster.

Marine Deputy Wilfredo Guerra was patrolling on the Long Key Bridge when he saw a man later identified as Comesana with a cooler and fishing rods. Deputy Guerra inspected his cooler and found the illegal catch. The mutton snappers measured under 15 inches, but State law requires them to be 18 inches.

Florida lobster season runs from Aug. 6 to March 31 with mini season beginning on July 24. Harvested lobsters must be measured in the water, and the carapace must be larger than three inches. Law requires every lobster angler possess and use of a measuring device at all times. Deputy Guerra issued Comesana a notice a to appear in court for the violations.