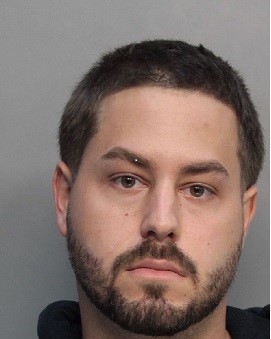 Key West Police have obtained a warrant for a Miami man who went on a tagging rampage in the Keys last weekend. Sunrise resident Tyler Edward Forgatsch, 23, is suspected for spray painting graffiti on several Old Town buildings on April 29th.

A couple out walking downtown on April 29th noticed the smell of spray paint in the air. As they came around the corner of Front and Whitehead streets, they saw a man spray painting a wall. The witness quickly took a picture of the suspect then called police. The suspect turned to the couple, then apparently changed his mind, dropped the paint can and walked away towards Mallory Square. The witness followed him and watched the suspect drive away in a black Nissan Ultima. The witness was able to capture the license plate number.

Officers arrived and found that three businesses had been vandalized. With the help of the eye witnesses and video surveillance, officers were able to identify Forgatsch. A warrant was issued Wednesday and police issued a Be On the Lookout. It’s suspected that Forgatsch has returned to the mainland.

Officers also suspect that Forgatsch is responsible for a tag in the Marathon that Sheriff Rick Ramsay spotted in Marathon on his way to work Tuesday and stopped to paint it out.

Anyone with information as to the whereabouts of Forgatsch is urged to call the Key West Police Department at 305-809-1000. Or tips can be submitted anonymously with Crime Stoppers at 1-800-345-TIPS or at www.tipsubmit.com.