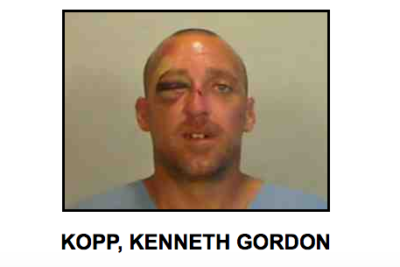 A Lake Worth man was arrested for attacking a man with a crowbar in a downtown fight early Sunday morning. According to reports, Kenneth Kopp, 36, called the Monroe County Sheriff’s Department and said that he was following a car full of men who beat him up, claiming he was “going to run them off the road.”

MCSO stopped the car on US 1 and an ambulance arrived on scene. Kopp had a large laceration over his eye, blood on his face, hands and several other parts of his body. Medics advised him that he needed stitches, but he declined and stated that he “just needed liquid glue to put it back together.” Kopp declined to speak with deputies about what happened other than “he had gotten into a fight with a group of guys downtown.”

The group consisted of Jacob Bailey, 21,  Austin Smith, 20, Andrew Nassoiy, 21, and the victim, Garrett Jones, 21, who stated they were visiting Key West to have good time. They told officers that after leaving a club on Duval Street, they were returning to their vehicle where they met two other males – one of which was Kopp – who Smith claims “was shit talking them.” A fight broke out among them without any injuries and both groups parted ways.

The group of four males then said that, as they continued toward their vehicle, a Chevy SUV came screeching up and Kopp exited the vehicle with a crowbar in hand. He stuck Jones in the head with the 16-inch crowbar. At this point, the group started physically fighting Kopp – causing his injuries. During the altercation, one of the members of the group grabbed the crowbar, and all four got back into the car and drove off when Kopp began following them out of Key West.  The incident occurred on the corner of Duval Street and Caroline Street.

Kopp was treated in the Lower Keys Medical Center for a fractured eye orbital and Jones had an inch-and-a half-laceration on his head from being struck by the crowbar.

Kopp is being charged with aggravated battery with a deadly weapon.