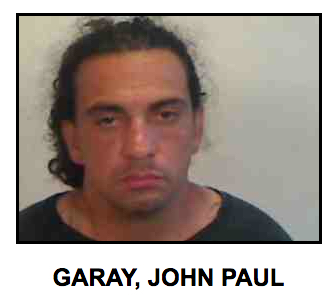 Busy. Busy. Key West Police arrested a Miami man suspected of committing burglaries in three separate locations on Sunday. John Paul Garay, 37, faces felony charges of burglary of an occupied dwelling and grand theft among others after two women reported seeing a man in their residences.

Around 12:45 Sunday afternoon, a woman at a guest house on Duval St. called police when she went into her bedroom and saw a strange man. At first, she said, she thought he might be a hotel employee, and she told him she didn’t need towels. She told police the man said “okay” and walked out of the room. She said after he left she went into the bedroom and realized she was missing several valuable pieces of jewelry that had been on the nightstand, including emeralds and an Atocha coin pendant.

In the meantime, a nearby jeweler called police to report that a man had just come into the shop and tried to sell him an Atocha coin pendant.

While officers were still viewing surveillance video and interviewing witnesses, a second burglary call came in. Officers responded to the 700 block of Simonton where a resident reported a burglary in progress.

This victim said she was in her home watching television on the first floor. She looked up and saw a strange man upstairs, entering her bathroom. She quietly stepped outside and called the police. Officer report that when they arrived, Garay came out of the home carrying a laundry basket filled with electronics, clothes and jewelry that belonged to the family living in the home. Garay had jewelry from the Simonton Street home in his pockets, along with the jewelry stolen from the woman at the resort.  He was reportedly wearing a pair of shoes belonging to the second victim.

Upon closer inspection, officers found evidence of forced entry around an upstairs window and a nearby door. Garay’s old shoes were reportedly found in place of the stolen ones on his feet.

Garay was arrested without incident and transported to the Monroe County Detention Center. The stolen items were returned to the owners. However, there was a GPS unit that did not belong to either victim.

Later in the evening, a woman reported that someone had broken into her vehicle in front of her Packer St. home and stolen her GPS. While speaking with the woman, officers turned on the GPS that Garay had been carrying among the other stolen items. The GPS showed the victim’s home address programed as the home location. Petit theft and burglary of a conveyance charges were added to Garay’s other charges.