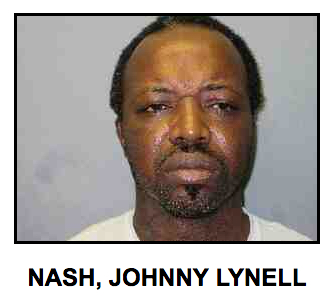 A Florida City man with a violent criminal history was arrested Thursday, charged with threatening to shoot a Sheriff’s Office lieutenant in the head.

Sheriff’s detectives received information from a source that 47 year old Johnny Nash was planning to shoot Lt. Al Ramirez in the head because he holds the lieutenant responsible for his arrest in October for Sale of Cocaine.  The information was Nash specifically said he planned to “ambush” the lieutenant at Friendship Park in Key Largo, take the lieutenant’s own firearm away from him and shoot him in the head with it.

Nash was arrested in October on an outstanding warrant for Sale of Cocaine. The warrant stemmed from a September incident where an undercover operative purchased cocaine from Nash on Hibiscus Lane in Key Largo.

Nash has a past arrest history which includes possession of a weapon by a convicted felon and attempted first degree murder. The attempted murder occurred in Florida City; he was convicted and served 8 years in prison.

Nash was booked into jail on felony charges of making threats against a law enforcement officer. His bond is set at $75,000. Nash is being charged under a new Florida statute which just took effect on October 1st of this year, Florida Statute 836.12 makes it unlawful to make threats against law enforcement officers, state attorneys, assistant state attorneys, firefighters, judges, elected officials or family members of those persons.

“We take threats against anyone seriously,” said Sheriff Rick Ramsay, “but this statute gives us a new tool when it comes to threats against law enforcement. We will not tolerate threats against our officers and will move quickly and decisively to make an arrest when someone threatens one of our own.”