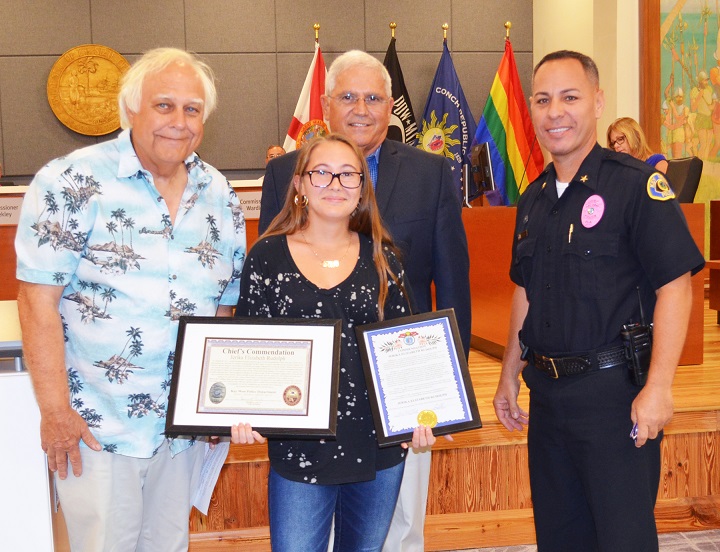 On August 24th, Rudolph was driving on South Roosevelt Blvd when she saw a silver SUV veer toward her. She saw the vehicle continue past her lane, jump up on the sidewalk and fly over the seawall. The vehicle crashed upright in the middle of a channel and began drifting with the strong current. Rudolph jumped out of her vehicle and heard a woman shout out for help. She told people nearby to call 911, then immediately plunged into the water to rescue the occupants of the vehicle.

There were three people in the SUV: a man, a woman and an eight-year old child. They struggling to escape by trying to break out the windshield. Despite the current and the fear on the part of the victims, Rudolph was able to pull the woman and the child out of the vehicle and help them safely to dry land. By then, police officers were on scene and helped the man to safety as well.

“Jerika’s fast, selfless response helped divert a terrible tragedy,” Chief Lee wrote in the commendation. “She risked her own safety to ensure that a child and her mother were out of harm’s way. With this decisive action, Jerika sets a standard that all citizens can aspire to.”

Commissioner Payne praised Rudolph’s courageous act, and noted that, during the rescue, she had lost one of her sandals. So, in addition to the City and Police Commendations, Commissioner Payne awarded Rudolph with a gift certificate to Kino Sandals, to replace her lost shoe.