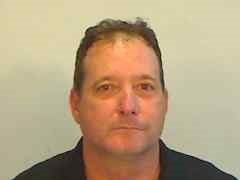 A local business man was arrested Tuesday for selling more than services from his mobile business.

A joint investigation by the Key West Police Special Investigations Unit, Homeland Security Investigations, the Monroe County Sheriff’s Office and Customs and Border Patrol discovered that Jerry Phelps, 54, was trafficking cocaine while he was cleaning carpets.

During an undercover operation, detectives discovered that Phelps was selling cocaine while working, and using his Rug Busters van to make cocaine deliveries. Detectives obtained two warrants for his arrest. Upon Phelps’s arrest, detectives located nine bags containing over 26 grams of powder cocaine and over $2,000 in cash on Phelps’s person. A search warrant for Phelps’s residence uncovered another 15 bags of cocaine, 31 grams of marijuana, and over $9,600 in cash.

Phelps was transported to the Monroe County Detention Center without incident.