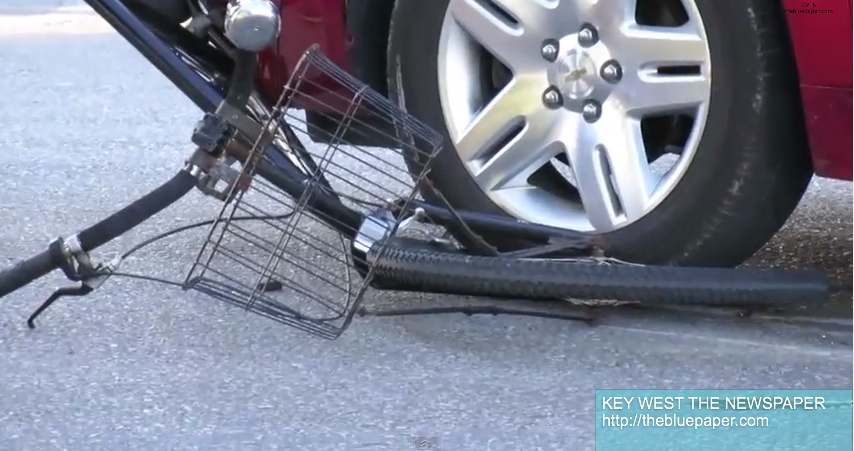 The worst picture you could ever imagine of your car would probably be the one where it’s stopped in the middle of the highway, at night, with the handlebars of a bicycle sticking out from beneath your tires.

“I didn’t see him. A guy on a scooter just started yelling at me….So I looked over there.” the driver told us.

He said he just heard the kid bump the car and out of the darkness a shirtless kid went tumbling and rolling onto the asphalt, illuminated in the car’s headlights. “I never saw him. I have no idea how it happened.”

Unfortunately in Key West what happened on Wednesday night is hardly an isolated incident. We gathered opinions from some of Key West’s leading bicycling advocates, like Tom Thieson, aka ‘The Bike Man’, who owns 500 bikes:

“Is that why they call you ‘The Bike Man’ ?” “Yeah, that’s why and also they call me Bike Man because I’ve got the biggest ding-dong’s on the island.”

Ahh, we can’t explain that one, afraid you’ll have to watch the video… it’s pretty much self-explanatory…

And be sure to make it to the end of the video and catch MC COUSCOUS and Briana Ansara performing their great Key West original song, “SLOW DOWN.”

10 thoughts on “KEY WEST: CAPITAL OF BIKE CRASHES, Locals Talk About What To Do”