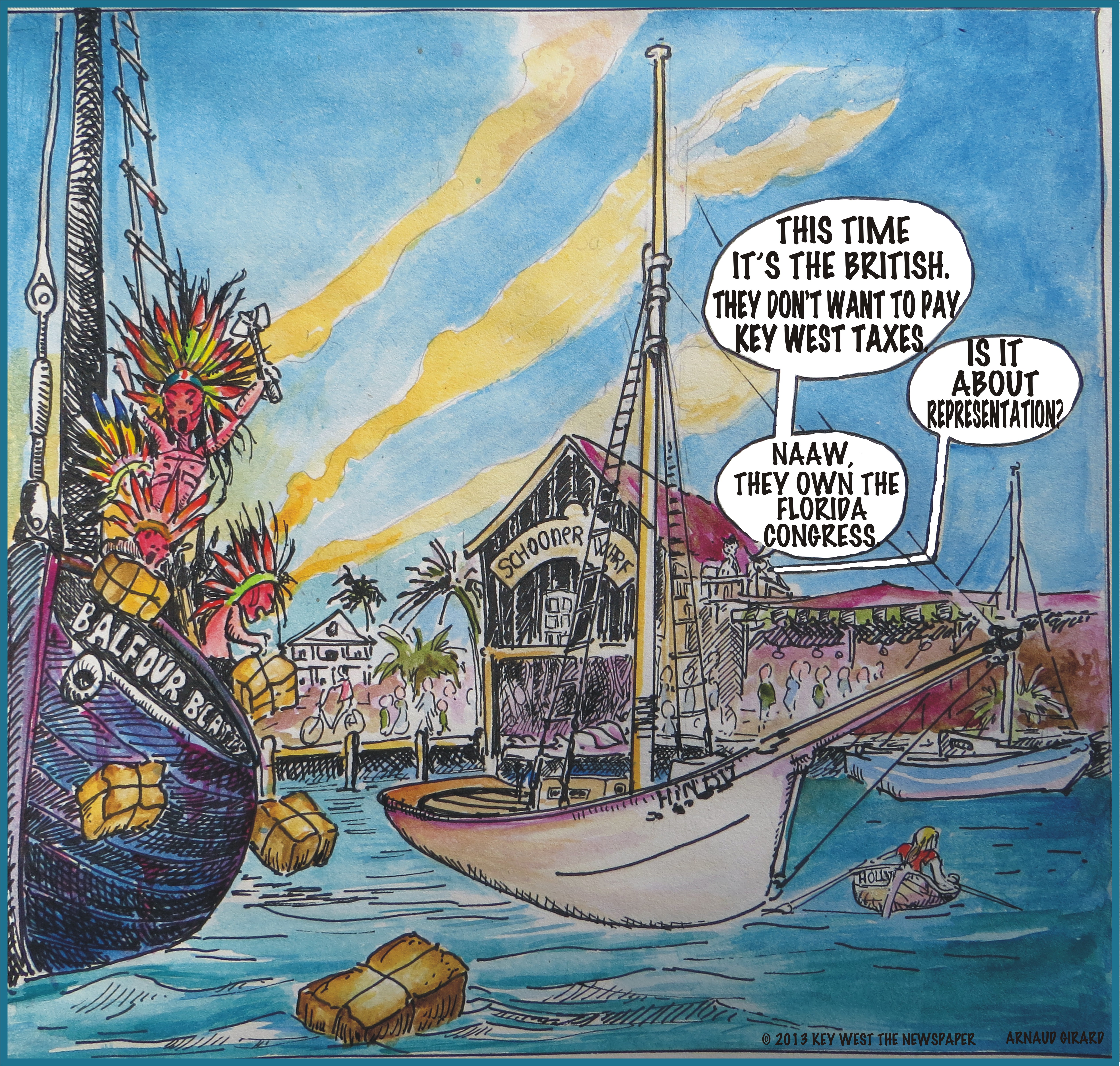 To avoid paying 11.3 Million dollars in back property taxes giant British conglomerate Balfour Beatty (BB) is asking a judge to disregard its property title on 890 units of housing located in Key West.  BB argues that it’s not the “real” owner of those units, that the homes “really” belong to the Navy and they should be immune from property taxes just like any other federally owned property.

However this new twist could implicate BB in an extensive web of questionable practices including the receipt of millions of dollars of Basic Allowance for Housing (BAH) funds that are allocated by Congress for private housing, possibly having misled bond investors as to who owns the houses securing BB’s 587 Million dollar bond issuance, and arguably conducting unlawful secretive private sales of government property such as the Peary Court housing.

The reader may remember that back in May of last year BB’s attorneys threatened to sue the City in defense of their “property rights”:  The right to sell Peary Court, a 23 acre housing complex in Key West, to the highest bidder with full development rights and no obligation to abide by the 30% affordable housing requirement found in the City’s code.

BB’s harsh position triggered an unexpected suite of events.  The controversy has now reached our Capitol in Tallahassee.

It began when a Key West the Newspaper investigation brought forth this troubling question:  If BB is the owner of the Peary Court housing and can sue the City over ownership rights, then why has it not been paying property taxes?

After playing around for awhile with a false rumor that Peary Court was a federal enclave (beyond the reach of local laws), BB’s agents had to admit the truth:  They own fee simple title, not only to the 157 units at Peary Court, but to all family military housing units in Key West, and have since 2007.

As this extraordinary and secretive real estate deal finished decloaking last year before wide-eyed Key Westers, another bombshell hit town.  Karl Borglum, then Property Appraiser, claiming BB’s agents had pulled the wool over his eyes back in 2007, dropped an 11.3 Million dollar lien at BB’s front door for failure to pay taxes on the 890 housing units it “owns” in Key West.

In the sound and fury that followed, BB pulled a one-eighty, completely abandoning its speech about violation of property rights and declared that it should not have to pay property taxes because, in fact, it doesn’t really own any of those Key West homes; they really belong to the Navy.  Apparently, it was all a bit of “make-believe ownership” and therefore they shouldn’t pay property taxes.   To succeed in its lawsuit BB will have to convince Judge David Audlin that its role is limited to that of a property manager.

If BB is a mere property manager, how could it have borrowed 587 Million dollars secured by houses that it does not “own”?   BB did manage to fly under the radar for five years, never asking for a building permit and never filing any title documents showing the 2007 conveyance.  But the company’s titles to those housing units were used to collaterize  587 Million dollars  in bonds and banks require the filing of Mortgage documents.  And so, the truth was discovered in the records of the Monroe County Clerk.  Further research revealed that Standard and Poor (the security analyst) described the bonds as being secured by the “high quality of the assets”.

Now, if BB’s LLC doesn’t really own the rental units, would that mean that it has deliberately misled bond investors?

And then there is the matter of the BAH money; the tens of millions of dollars received by BB to subsidize the rent of the “non-governmental” (privately owned) apartments used to house military personnel.

Posing as a private landlord, BB is able to collect millions in rent under what could be a very advantageous BAH system.  Since BAH is also based on the specific pay grade of the member, in certain cases a $3,040/month rent could be allotted for the very same two bedroom apartment that might otherwise rent for only $1,446/month.

Can BB have it both ways?  Can it collect BAH claiming to be a private landlord while at the same time claiming before Judge Audlin that the units are government owned and entitled to immunity from taxes? If the Judge rules in BB’s favor, will it mean that BB was never a private landlord qualifying for BAH?

BB also claims that the Navy controls the rental units and that BB is merely providing a governmental service by housing military members.   However, according to a September 2009 NAS Key West document obtained by KWTN, 39% of the overall units occupied at that time were rented to civilians.

BB claims that the homes will revert back to the Navy in 50 years but it is already busy selling off Peary Court to the highest bidder.  Arguably, 50 years of use and depreciation would leave even the newly built houses with no remaining equity value so that in fact BB could conceivably handover a completely spent asset or nothing at all at the end of the 50-year contract term. These people would be left penniless, and looking up advice on how to fix bad credit shortly thereafter.

Finally, we looked into BB’s claim that 90% of the profits go to the Navy.   But, here’s the truth:  BB collects the rent.  Those funds are then dispersed to pay off the debt service (the money borrowed and spent to pay a BB subsidiary to demolish, renovate and construct the housing units) and then to BB subsidiaries for continued maintenance, property management incentive fees, property management fees, asset management fees and brokerage fees.

We carefully examined the Operating Agreement to figure out how profits are doled out.  While BB gets monthly cash distributions (assuming there is any profit left over that month), we don’t see any indication that there is an obligation to make cash disbursements to the Navy until either the company is dissolved or the contract term has ended.   It’s true, after 50 long years, IF there is any accumulated profit sitting in those bank accounts, it will go to the Navy.

Regardless, the fact is, far from receiving any cash in this deal, the Navy actually was forced to bailout the giant corporation in 2012 to the tune of an additional 8.4 Million dollars.  At this rate chances are the Navy is never going to see a penny of that rental income.

But that’s not all there is in this theoretical ‘fraud file’.  Remember this whole thing started when BB threatened to sue the City for reducing the Peary Court sale price by imposing the 30% affordable housing requirement on future development.

What was interesting at the time was the secrecy surrounding the sale process.  The choice bidder was not even identified at first other than as the “likely purchaser”.  Monroe County Housing Authority complained of not being able to submit a bid without signing a “confidentiality agreement” which was incompatible with the Sunshine Law.

But what about that private secretive sale?  If the ownership was a sham and the Navy is the “equitable owner”, could it be that the sale of Peary Court was “equitably speaking” a scam used to disguise an unlawful transfer of what is in fact “equitably speaking” public property?

If BB is not really the owner of the Peary Court homes and they really belong to the Navy, then under federal guidelines, the sale should have followed the same public process that was used for the conveyance of Truman Waterfront and Poinciana Plaza, procedures that resulted in transfers of those properties to the City of Key West.

BB’s version:  BB doesn’t really own the military housing units, which could mean that it conspired with the Navy to misuse BAH subsidies, misled bond investors, and is proceeding with an unlawful sale of public property.

Or the Navy’s version:  In order to rapidly provide suitable housing for Navy personnel and their families, ownership of dilapidated housing units was turned over to a private company (BB) which in turn agreed to renovate them and rent them out to Navy personnel when needed.

The Judge will have to decide.  Interestingly enough, documents provided by the Department of Defense and the Navy regarding the deal with BB (including the specific contracts with BB) show that property taxes were, in fact, a part of the equation from the start.