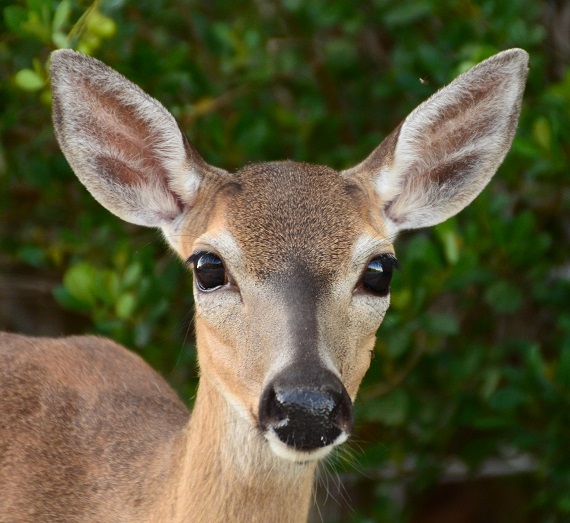 The U.S. Fish and Wildlife Service (Service) completed post Irma Key deer index surveys in their core habitats on Big Pine and No Name Keys.  Driving survey work following procedures used since 1968 began immediately upon the return of refuge staff from mandatory evacuation and continued for several weeks.  “These Key deer and the natural habitat they depend on are pretty resilient.  First they made it through the New World screwworm infestation last year and now through the direct hit of a category four hurricane. We are happy to report Key deer population numbers are well within the range we observed before Irma,” said Refuge Manager Daniel Clark.

The driving surveys provide an index to Key deer population size and serve to inform managers on population trends and overall status. Prior to Hurricane Irma, density estimates were routinely obtained using these same standardized methods.  After Irma, increased numbers of surveys were conducted to ensure we had an accurate estimate of the population since there are an increased number of response and recovery vehicles on the roads as well as piles of debris. The most recent estimate collected prior to Hurricane Irma determined approximately 1,100 Key deer occupied the core range on Big Pine and No Name keys. Survey estimates post-Hurricane Irma suggests 949 Key deer live in these same areas. Key deer are now in the mating season (rut) and healthy, active deer are readily seen in the core area. So far the refuge has positively confirmed 21 storm-related Key deer deaths.   Since the storm, the Refuge has documented 12 deer deaths from vehicle collisions, up slightly from this time during previous years.  The Refuge encourages visitors, contractors and residents to drive slowly and safely from Big Pine Key to Sugarloaf to protect Key deer and other wildlife.

Photos of Key deer road surveys and other post Hurricane Irma impacts and efforts can also be found at our Flickr site: https://www.flickr.com/photos/usfwssoutheast/sets/72157687032543181.

The National Wildlife Refuge System protects wildlife and wildlife habitat on more than 150 million acres of land and water from the Caribbean to the Pacific, Maine to Alaska.  Refuges also improve human health, provide outdoor recreation, and support local economies. Visit our home page at http://www.fws.gov/refuges.

The mission of the U.S. Fish and Wildlife Service is working with others to conserve, protect, and enhance fish, wildlife, plants, and their habitats for the continuing benefit of the American people. We are both a leader and trusted partner in fish and wildlife conservation, known for our scientific excellence, stewardship of lands and natural resources, dedicated professionals, and commitment to public service.  For more information on our work and the people who make it happen, visit http://www.fws.gov/.