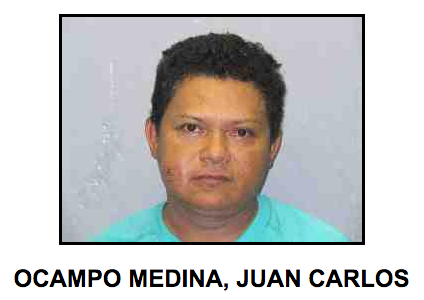 An Islamorada man is in jail, charged with attempting to murder his neighbor shortly after midnight on Christmas Eve.

Deputies Michael Onsgard, Garrett Test and Titus Hodges responded to 82207 Overseas Highway in Islamorada just before 1 a.m. after the victim called to report being stabbed with a knife. When the deputies arrived, they initially located the victim, 36 year old Hector Vasquez, and two witnesses. The suspect, 38 year old Juan Ocampo Medina was found nearby.

The victim and two witnesses all said Medina came to their house and asked them to come across the street to his residence to drink with him. They said when they walked into his back yard, Medina attacked Vasquez with a knife.

During the attack, Vasquez sustained a cut from the knife from his neck to his abdomen, about a quarter inch deep. One of the witnesses took the knife away from Medina, who then grabbed a shovel and hit Vasquez in the back of the head. Vasquez had a large cut on his head which required staples to close.

Both the knife and the shovel were recovered at the scene. None of the men gave a reason for the attack.

Vasquez was treated by Paramedics and then at Mariner’s Hospital. Medina was arrested and charged with attempted murder and he was booked into jail.