It seems ages ago already, but it has been just a few short weeks since we time-traveled back to the Dark Ages thanks to Hurricane Irma. By Dark Ages, I mean no electricity, no communications other than talking or shouting, and no running water. We were not, fortunately, forced to resort to dumping chamber pots out the window. Toilets still flushed as long as we hauled buckets from the filling pool (formerly the swimming pool) to replenish their holding tanks. Notably, the “dark” of the Dark Ages was truly stygian. At night after retiring, it was so black (how black was it?) that you could close your eyes and then open them and not see any difference, not see anything period except the random flashes from the electrons bouncing around inside your eyeballs.

Curious word, stygian. The simple definition is “extremely dark, gloomy, or forbidding.” The more intriguing one is “of or relating to the river Styx.” If you’re up on your Greek mythology, you’ll know that the Styx was a deity and a body of water, which must be something like light existing as a wave and a particle, which incidentally, it was neither in the wee hours of Irma. Most will know Styx as the stream no one looked forward to crossing because it cut a path between Earth and the underworld and, once you crossed over, there was no crossing back (with certain notable exceptions). If you, like me, are the sad victim of a woefully deficient classical education, you likely didn’t know Styx was a goddess but, as the saying goes, you learn (and immediately forget in my case) something every day. 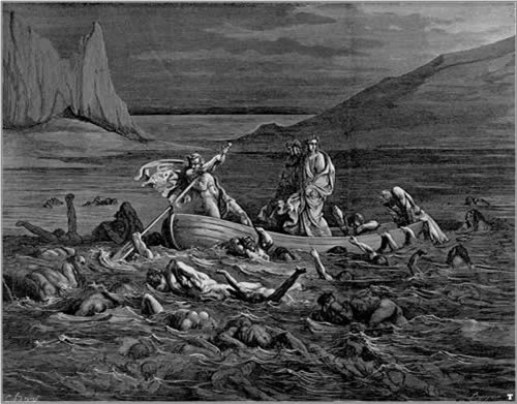 Okay. Which one of you ordered the large pepperoni with extra cheese?

Styx the G has an interesting backstory. Briefly, she was the daughter of Titans but then turned against them to side with Zeus when the gods and Titans got their war bag on. As a reward for her help, Zeus let her stay in his house and “gave her the honor of being the one on whose name solemn oaths were taken.” Thereafter, whenever a god made a promise, he or she had to fetch water from the river Styx and then pour it out slowly while pronouncing the oath, whatever it happened to be. Anyone who broke their pledge after that was slapped into a god-induced coma where he or she was not allowed to breathe or ingest nectar or ambrosia for a year. (This practice, many people tell me, later became popular as the Styx Diet.) After completing the initial year of fasting in place, the now-much-thinner punishees were banned from all god activities for nine years.

There’s not much more on Styx and what her life was like. I wonder if she had to shoulder the burden of all those oaths sworn in her name. Did she have to keep track of them in the days before spreadsheets and data entry? Did she have to mete out the punishment to oath breakers? How did she induce the year-long state of not breathing or eating? A simple touch on the delinquent brow? A whack upside the head? Or, Medusa-like, a stony stare that stopped all movement? Who knows?

In a way, Irma had this kind of Stygian effect on Key West beyond the black nights falling. She put the town into a coma of sorts. For a while, all movement stopped. The town froze in place—the way a rabbit might when it suddenly realizes a fox is eying it with bad intent—just before the storm hit, during the maelstrom, and after the eye passed. It was eerie. It was liberating in some ways. Being thrown off the grid for several days makes you realize how relationships suffer from all the demands and distractions of our electronic world. I can’t remember the last time we sat on a front porch with a group of people, watching the palms across the street whip about in the after-wind, and just enjoyed each other’s company (along with assorted snacks and beverages). In that sense, the hurricane experience was not black at all. Indeed, it was lighter and more enlightening than daily life has been for a long while.

This leads me to surmise a new approach to the endless pursuit of world peace: blackout-induced coma diplomacy. I imagine that people who wake up from states of profound unconsciousness often ask questions like “Who am I?” “Where am I?” “How did I get here?” “What happens now?” Sounds like a good place to start, doesn’t it?

One Response to “Is Black Black?”