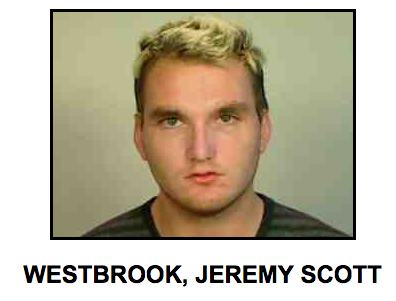 A Stock Island man was arrested on Sunday, June 24, for allegedly stealing an ice cream shop co-worker’s debit card and going on a shopping spree around town.

According to reports, on June 23, a female employee at 2 Scoops Ice Cream noticed that her debit card was missing from her purse. She checked online and noticed three charges that she did not make totaling $466.79 and called her bank. The charges included $397.73 at Office Max, $24.71 at Ross, and $44.35 at Kmart. She was also missing $10 cash from her wallet. She called Ross Stores and they gave her a suspect description that matched that of her co-worker, Jeremy Westbrook, 24, possibly wearing his work uniform.

Officer Valdez-Marrero stated in reports that a manager at Ross Stores showed him video surveillance of two white males – one being the suspect, Jeremy Westbrook – purchasing some items at the register. The receipt confirmed that the purchase was for socks and shirts totaling $24.71.

Westbrook’s name came up as having an active warrant, and Valdez-Marrero went to his home on Stock Island to place him under arrest. In the report, Marrero states that he checked Westbrook’s wallet and found the victim’s debit card, which Westbrook first said he found at work before finally admitting to taking the card. According the Marrero’s report, Westbrook said he bought shirts and socks from Ross, a book pack and $25 gift card from Kmart, and a laptop from Office Max, but denied taking the $10 cash.

The officer states in the report that he also located a second card from another individual, which Westbrook said was left behind at his job at 2 Scoops a few days earlier so Westbrook kept the card and bought food from 2 Scoops and items from Amazon. He later told officer Valdez-Marrero he knew he was supposed to keep it safe until the customer claimed it, but instead he put it in his pocket and kept it.

According to the report, the owner of the lost card had it cancelled due to fraudulent charges. Other chargers on the card included 5 Guys Burgers and Starbucks.

Westbrook is being charged with unlawful possession of a stolen credit card and fraudulent use of credit cards.