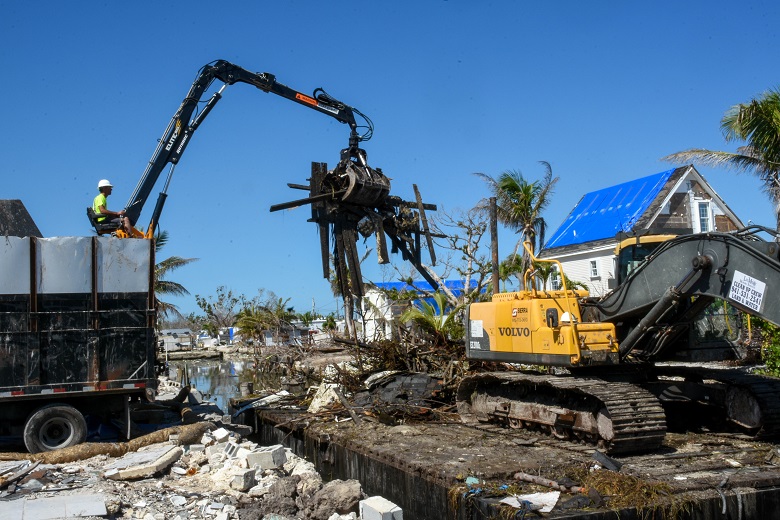 Monroe County staff is providing local coordination of the project, which is expected to take 4-6 months to complete. The canals and nearshore waters in this project are being prioritized by level of impact. The hardest hit areas will be cleaned first. The work is being done with an operational plan approved and permitted by DEP and NOAA that ensures the protection of wildlife.

Collecting marine debris is a slower process than collecting land debris. The marine debris that is collected will be taken by barge to a temporary off-loading site. It won’t stay at this location long before being hauled by trucks to the Debris Management Site located at the former Big Pine Key Prison site. From there, it will be sorted and prepared for hauling to a permitted solid waste disposal facility approved by DEP on the mainland.

The process can be made quicker if debris removed from canals can be staged on vacant lots along the canals. The staging would last only a few days at most. If you would like to volunteer your vacant property along a canal to be used for staging to help expedite the marine debris removal process, and keep costs down, please contact llongley@drcusa.com.

For this project, the debris being removed includes vegetation, hazardous waste, construction and demolition debris, propane tanks, appliances, electronic waste, docks, vehicles, motorhomes, seawalls and houses or portions of houses that pose a direct threat to the health, safety and welfare of the residents of the County and the State of Florida.

It does not include boats, which are being addressed through the displaced vessel removal effort being overseen by the FWC. Also, no sediment or silt will be removed under this phase because it is not reimbursable by FEMA.